Getting Checked for His Children 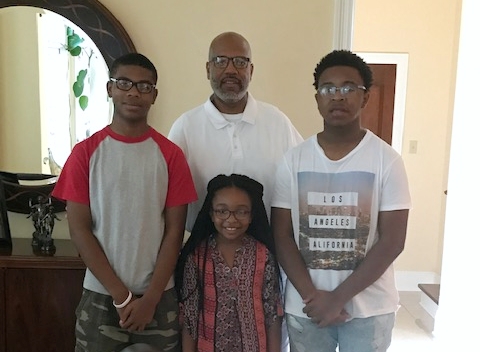 Through airwaves and internet streams, Philadelphia's WURD broadcasts to its predominantly African American audience, highlighting topics important to the community.

This year, WURD partnered with the Colorectal Cancer Alliance and other organizations to highlight the greater risk of colorectal cancer among the African American community and provide free screening tests, including a colon cancer screening test from LetsGetChecked.

Donnie Bradford, a 49-year-old man from Humboldt, Tennessee, was listening to the radio station’s stream at home.

“It really got my attention,” Donnie said. “I have two older sons and a daughter who just turned 13, and I want to be here as long as I can for them.”

Donnie opened his internet browser and applied for a test. About a week later, LetsGetChecked’s FIT (fecal immunochemical test) sample collection kit was on his doorstep.

Donnie said some misbeliefs about colorectal cancer screening can stop people from getting checked — including privacy concerns, fear of pain, and falsehoods about detection.

“As men, we think we’re not going to let nobody down that way,” Donnie said. “There are also rumors that if you don’t feel like you have cancer, then don’t get screened. But you can’t detect cancer by a feel. And screening doesn’t hurt.”

LetsGetChecked provides a simple colon cancer screening test that can be done at home. All that’s required is a small stool sample, which is returned to a lab by UPS and tested for blood. Blood may indicate the presence of cancerous or precancerous growths in the colon. A positive test requires a follow-up colonoscopy.

“The process was very easy and user-friendly,” Donnie said. “After filling out an online form, I got a phone call, set up my address, got the kit, and then the instructions were simple to follow,” Donnie said. “Once I finished the kit, UPS came and picked it up and I got the results quickly.”

Donnie knew about the dangers of colorectal cancer — the second deadliest cancer in the U.S. among men and women combined — because a pair of his cousins had been diagnosed with it.

“It was a 50/50 chance for them,” Donnie said. “They had to go through a process of heavy chemotherapy and medicines, and to hear them say ‘I wish I’d gotten tested,’ it really affected me and my state of mind.”

Screening is the No. 1 way to prevent or detect colorectal cancer early, when it’s most treatable. Colorectal cancer symptoms often don’t appear until the disease is in advanced stages.

“I just want to remain healthy and know my status,” Donnie said.

His result arrived through an email with a secure link, and it contained the news he had hoped for.

“I didn’t have any signs of colon cancer, which was a great relief for me,” Donnie said. “And even if it said I had traces, it would’ve been a relief for me. I’d rather know than not know.”

To learn if you qualify for a free colorectal cancer screen test, visit quiz.getscreened.org and fill out the survey. Or, if you would like to help find partners in your own community that can share these free screening kits, email nfathi@ccalliance.org.