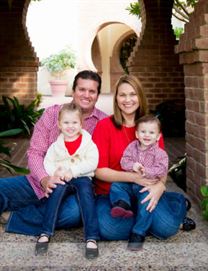 I had bleeding on an off since 1998. I was only 21 and my doctors didn’t think there was anything to be concerned about after I had a clean endoscopy. I told every doctor I went to about my bleeding. For years I was dubbed “too young” and they assumed it was “just hemorrhoids” and nothing serious, especially not cancer.

Fast forward to June of 2012 and I was a pregnant, healthy 35 year old having her second child. I started noticing blood, mucous, thinning and pain when I used the restroom, but was assured by my OB/GYN it was "normal" at six months along and it was just pregnancy related hemorrhoids. I was prescribed suppositories and sent on my way. Three months later I gave birth to our beautiful baby boy, but my symptoms worsened. Again, no exam or scope, just given more suppositories and sent home.

Two more months and NO improvement! I was miserable and the doctors were giving me no answers. I made two appointments, was ignored again by my OB, but finally my primary doc agreed we should look into it further with a tiny scope in her office. She was not comfortable diagnosing it herself, but knew it didn’t look normal and fought to get me a colonoscopy. Finally on April 1st, 2013 I was diagnosed with colorectal cancer on the day of my colonoscopy. Worst April Fool’s Day ever! The fight began with so many scans and tests. In a matter of two weeks I had my chest port for chemo, prepared for radiation and had an ovarian transplant to move my ovaries out of the radiation field. I wore a pump 24/7 filled with 5-FU chemo and went to radiation appointments five days a week for 8 weeks. I experienced third degree burns from the radiation and unbearable mouth sores from the FOLFOX, which were met with more radiation and chemo after healing, and finally surgery to remove the primary tumor.

I had a temporary ileostomy (which I called "Thelma and Louise" because I wanted to throw it off a cliff), a devastating recurrence, liver resection, gallbladder removal and through my continued chemo, I started the process of adjusting to a “new normal.” I have now heard NED (no evidence of disease) for two rounds of scans. It’s been eight months cancer free and we are celebrating like crazy! Now is the time to take action.

How have you chosen to get involved?

I have chosen to submerge myself in advocacy and support for other cancer patients and survivors because it gives me such joy and purpose, and I believe that impacts my recovery in a positive way. I even started a change.org petition in early January urging a lowered screening age and have been able to get 35,000 signatures so far!

I know personally I get such a sense of fulfillment when I’m able to help another starting out on their journey. Anything I can do to make it easier and less frightening, also making them feel they are not alone, brings a wonderful sense of accomplishment. I would hope it has the same effect on other advocates. Give it a try!

How did cancer change your life?

I choose to live in the “now” and I'm enjoying every second! I am not letting cancer rule every aspect of my life. It controls a great deal of it, but it does not own me! I am hoping to be one of the lucky people who survives stage IV disease. You don't have anything if you don't have hope and I plan on beating this beast. It's important to me to get the word out that you are never too young for cancer, and people need to know the signs. I am an advocate for early testing and pushing your docs for tests if something isn't right. Go with your gut (no pun) - if something feels wrong you are your own best advocate! Get screened and tested, don't put it off! Keep current on your health checks, and insist docs pay attention when something isn't right. I don't want anyone else to go through this and I am rooting for all of my friends fighting this ugly battle.

Cancer has changed my life in every way possible. It has opened my eyes to a world I did not know existed. I used to believe cancer happened to “other people” and that I was not at risk because I was young and healthy. I had no family history nor did I have any close friends affected by cancer. Cancer was simply not on my radar. Since my stage IV diagnosis, dealing with the hardships and life threatening aspects of this disease have made me a better person. I’ve always been compassionate, but it’s given me a greater amount of empathy and care for those suffering around me. It’s made me pay attention to those struggling with chronic and terminal diseases, and has given me the desire to get involved whenever possible. I will never be happy I was stricken by cancer, but has it impacted me in a positive way as well? Absolutely!

What would you tell someone who was newly diagnosed?

Don’t listen to the statistics and don’t compare yourself to anyone else with this disease. We are each unique, like a snowflake, therefore our disease cannot be predicted by someone else’s response or lack thereof. Also, statistics are based on data that is closely tied to Medicare stats and are typically five years behind. Researchers are making strides every day, so fight as hard as you can to survive. Also, live in the moment. Try not to worry about what might happen, and concentrate on getting stronger and remaining positive. Some days seem like it will never improve, but it’s always darkest before the dawn.

I would love to see younger people be more aware that colon cancer CAN and DOES happen to their demographic. I would love to see the stigma associated with colorectal/anal cancer removed, and replaced with facts and acceptance. Everyone poops. Everyone has a colon! Let’s take care of them and talk about it. Education and screening will save lives, and that is the most important fact. Let’s share our experiences with friends, family, neighbors and classmates – anyone that will listen because together we can put an end to this highly preventable disease.