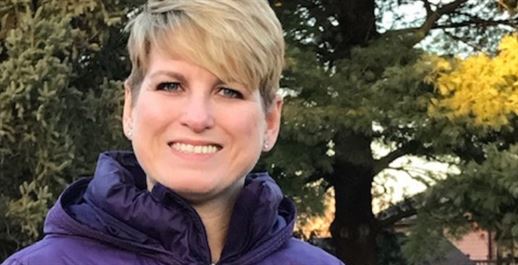 Carrie Licht’s dad was old school. He grew up during the Great Depression as a farmer, and he wouldn’t go to the doctor unless it was critical.

But by his late 70s, severe stomach issues led doctors to demand the procedure. They found a tumor in his colon about the size of a baseball.

After chemotherapy, radiation, and a couple surgeries, Carrie’s dad’s heart couldn’t keep up, and he passed away.

Carrie’s grandmother on her mom’s side also suffered from colon cancer, passing away from the disease before she was born. Her mother, knowing the risks, would have a colonoscopy every five years.

“When I was young, it seemed like she was going all the time, while my dad felt like he didn’t need it because it didn’t run in his family,” Carrie said.

Later in life, Carrie adopted her mom’s approach to screening. She opted to be screened early, at age 40, because of her family history and stories about a friend who was diagnosed with stage IV colorectal cancer at age 35.

“Everyone thinks it’s an old person’s disease, but that’s not true,” she said. “I talked to my doctor, and he said, ‘Well, they usually start at 50 but because you have it in your family history, you can do it earlier.’”

Carrie’s insurance company covered the procedure, as well as a second one five years later, as preventive.

Her latest colonoscopy, this past November, found a polyp. Polyps are tissue growths that can turn into cancer. Doctors often remove them during colonoscopies. The discovery surprised Carrie because her previous colonoscopy was clear.

“They gave me pictures of the inside of my colon and then showed me a picture of the polyp,” Carrie said. “I thought, What am I supposed to do with these pictures—use them as my Christmas cards?”

On a serious note, Carrie also thought about what could’ve happened had she waited until 50 to be screened.

“A lot can change in a year,” she said. “Had I waited 10 years, who knows what that polyp could’ve turned into?”

Unfortunately, like Carrie’s dad, many eligible people in the United States go without being screened for colorectal cancer.

In 2015, only 63 percent of people above age 50 had been screened, according to the National Health Interview Survey. Screening rates are lowest among the uninsured.

With the generous support of Boston Scientific, the Colorectal Cancer Alliance’s Blue Hope Prevention Awards Program reduces barriers to colorectal cancer screening for those most in need of a screening. For six years now, Boston Scientific has continued their commitment to the Blue Hope Prevention Awards Program, allowing the Alliance to screen nearly 150 individual.