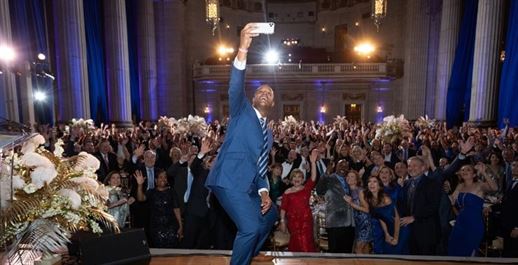 Nearly 600 guests came out to celebrate the Alliance’s 20th anniversary and raised funds to support its efforts to increase awareness and screening, care for patients and their families, and fund critical research. Since the event’s inception in 2011, it has raised more than $10 million and this year’s event exceeded its fundraising goal by raising $2.2 million dollars.

The theme this year was “Nation of Allies,” a message that resonated with Today Show and MSNBC News anchor Craig Melvin, the Bash’s emcee.  His brother Lawrence Meadows was diagnosed in 2017 with stage IV (metastatic) colorectal cancer at the age of 39 and spoke at the event sharing his journey, providing a message of hope for a cure as he in treatment for the disease. Meadows indicated that if it wasn’t for allies like his family, his wife and his two young children, this fight would be difficult. Melvin’s entire family joined at the Bash to support Lawrence. Melvin has been an active supporter and ally of the Colorectal Cancer Alliance.

The 2019 Blue Hope Bash was co-chaired by Curtis and Amanda Polk and Stan and Nina Snow and included a welcome cocktail reception, a special dinner program, live and silent auctions, performances by The Jersey Boys, one lucky ally winning a custom 2020 Porsche Macan S, as well as the first-ever Bash After Dark Party.

The Blue Hope Bash event series is the premier fundraiser of the Colorectal Cancer Alliance. The Bash occurs in cities across America to celebrate survivorship and remember loved ones.