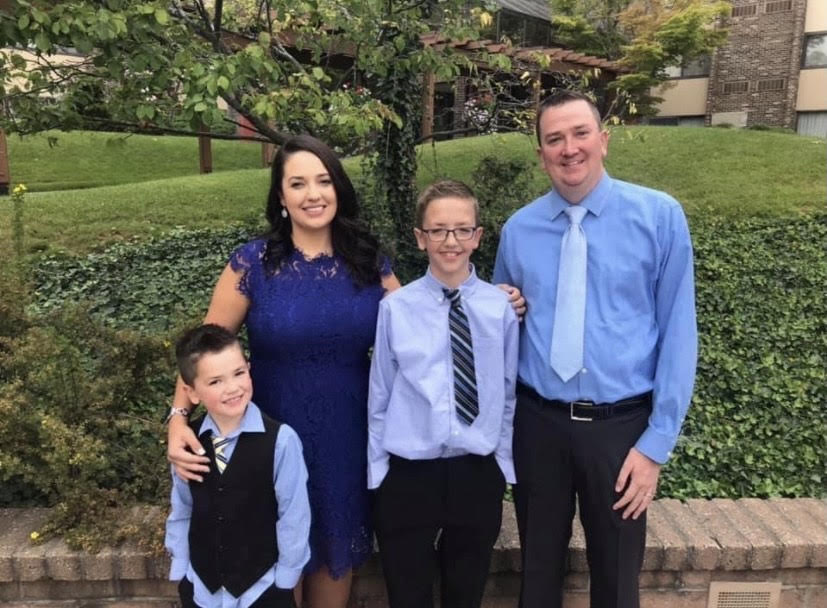 My husband, Tony, had rectal bleeding for about a year, but because he was 42 and his bloodwork was normal, doctors thought it was internal hemorrhoids. A colonoscopy to check was pushed back due to COVID-19, and a flare up of severe abdominal pain was diagnosed as diverticulitis, which he had experienced in the past.

Medical staff thought it was a closed case, until a colonoscopy last August proved otherwise. Forty-five minutes after the procedure bagan, a nurse asked me to come back to the recovery room. I had a horrible feeling I can’t describe.

The doctor told us that they started the procedure and found a large mass blocking Tony’s colon, and they were 99% sure it was cancerous. We were in absolute shock. My husband stopped speaking. I was crying. We had to tell our parents and then, even worse, we had to tell our two boys, who are 8 and 10. It felt like an out-of-body experience.

A biopsy of the mass came back as invasive adenocarcinoma — it was declared to be stage IIIb colorectal cancer. My husband went to the University of Michigan for his surgery and treatment, where they took about a foot-and-a-half of his colon. My husband is hands-down the toughest person I’ve met.

He tried his hardest to push through treatment and worked on and off for most of it. General Motors is his employer, and I can’t say enough about how they treated him. We got about 100 cards, and they were so thoughtful and truly cared about his well-being.

When my husband was diagnosed, he had quite a few friends and colleagues who grew mustaches to match his. The team sent this incredible photo when he started chemo to support and love him with fake and real mustaches. It was amazing to see. Chemo ended in January 2021, and after a full colonoscopy, he was declared NED (with no evidence of disease)!

Just as Tony received support, so did I — and I definitely needed it!

Cancer brought me to my knees as a caregiver. It was hard trying to raise and homeschool two young boys while taking care of my husband. On top of that, our youngest started having seizures and was diagnosed with epilepsy during this same time period.

We had an outpouring of support from our community throughout this. Also, the Colorectal Cancer Alliance’s online community is something I’m so grateful for — I can’t put it into words. To be able to connect with others far and wide who are going through the same struggles and same triumphs is amazing.

That’s the one thing about cancer; you truly see all the good in people. Hearing my kids bickering or having to clean the house isn’t as much of a burden anymore. It’s living a peaceful life with my husband, and that’s more than I could ask for.

Rachel Conklin is 38 years old and has two beautiful boys. She has been a stay-at-home mom for the last twelve years and has a Bachelor's in Business Administration and Accounting from the University of Michigan-Flint.