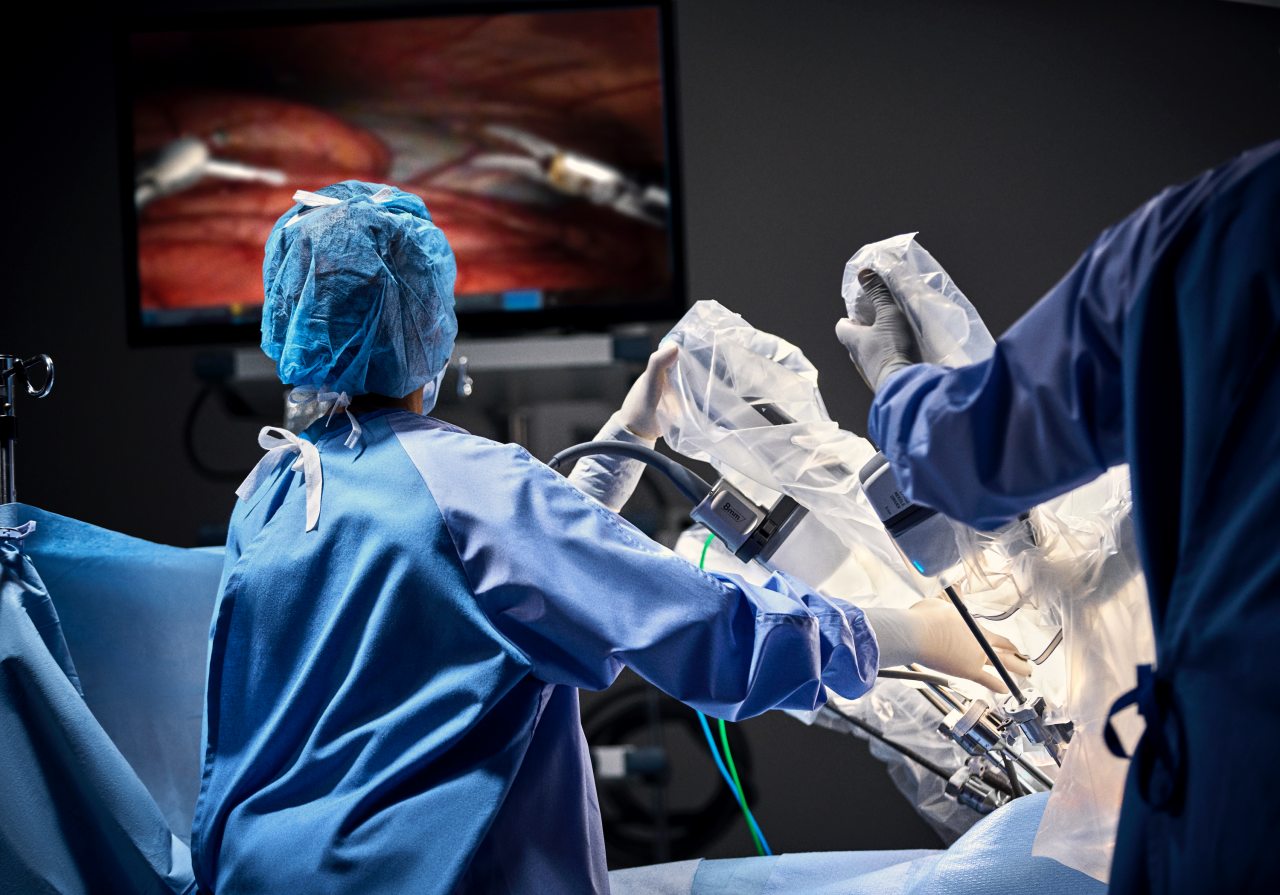 When most people think of internal surgery, they think of a team of professionals, huddled over a patient, peering into a wide, open incision. The surgeon reaches in with her hands and instruments, manipulating organs and cutting away cancer. When complete, the patient is stitched closed and is often left with a sizable scar.

This vision we see is called open surgery.

Open surgery is the most common type of surgery in the United States. But given advancements in surgical technology, it may not be the best thing for all patients.

The good news is colorectal patients may have other minimally invasive surgical options.

Dr. Tae Kim is a surgeon with Intermountain Healthcare in Utah. When he thinks of surgery, he sees a robot. More precisely, he sees a contraption known as the da Vinci robotic surgical system. The system is docked to the patient through ports, or small cuts. The robot can make complex movements with precision inside the body. Outside, drama is minimal.

The robot is linked to a control console, just feet away from the patient. The robot does nothing unless Dr. Kim is seated in his chair, eyes peering into a high-resolution 3-D viewfinder, with his hands on the controls. Often, his shoes are off and his muscles are relaxed, as he becomes fully immersed in the operation.

This type of surgery is called robotic surgery, which is one type of minimally invasive surgery. Dr. Kim uses robotic surgery because he has seen a shorter recovery time in most cases. Laparoscopic surgery, the other type of minimally invasive surgery, also uses small incisions. But as in open surgery, the surgeon hunches over the patient — which, after many hours and years, can result in ergonomic issues.

So why do the majority of surgeons still practice open surgery?

In short, open surgery is what they learned in their training and is likely in their comfort zone. Mastering a new technology requires a learning curve. Dr. Kim says it took him about 50 robotic surgeries to become proficient — all of which are done with full disclosure to the patients. Simulations are also used to practice on a computer. In the end, the benefits shine for both doctor and patient. 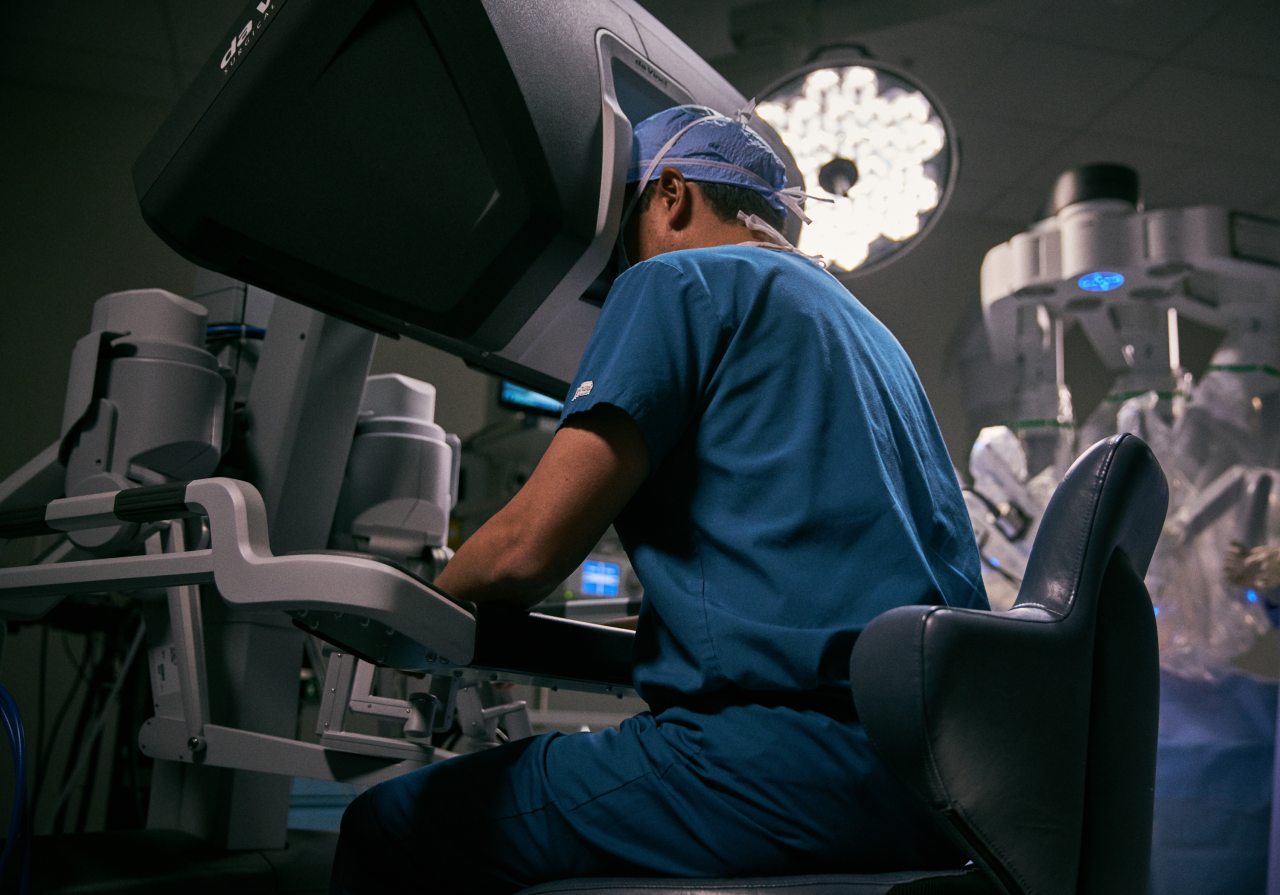 A surgeon at a robotic surgery console

Dr. Laila Rashidi, a colorectal surgeon at the Multicare Health System, first encountered robotic surgery in her residency training. She was among the first in her class to try the robot.

“I loved it because I could see our faculty operating in a really minimally invasive way,” Dr. Rashidi said. “I like to see how the patients did.”

That’s not to say she didn’t have hesitations about the robot at first. In medical school, 60 percent of her surgical training involved open procedures. The others were laparoscopic. None were robotic.

“When you’re watching from behind and not operating the robot, you may not know its advantage,” Dr. Rashidi said. “One of the big concerns of the robot, especially in the hands of someone learning, is the loss of tactile sensation. I was afraid of that.”

But the robot offers a multitude of benefits not provided by other surgical methods. The method is compelling enough that 99% of Dr. Rashidi’s abdominal surgeries are now done with robotics. She explained the benefits she has experienced to the Alliance, one by one.

Smaller cuts: “We cut a few small holes, 8 mm max, and place ports and attach the robot to you. We do everything inside the body, which helps with post-operative outcomes.”

Less trauma: “Every time you touch a bowel, you cause trauma, and trauma leads to inflammation, which can cause a patient to stay in the hospital or other complications. The robot lets me grab and pull on tissue less.”

Better, more precise movement: “With the robot, you can do things that you can’t do laparoscopically or open. It’s a tool that helps us do very complex cases with 360-degree motion anywhere in the body. You never have to work upside down. It can reach difficult areas like the pelvis. The system also has tremor control technology to help keep your surgeon’s movements smooth and controlled.”

Visualization: “When you bring in a robot, you have 3-D visualization where your own eyes alone won’t go. You’re doing a minimally invasive surgery in an open fashion with a robot, and that’s where comfort for surgeons is increased, along with outcomes for patients.”

Recovery: “ I’m also avoiding that abdominal midline with the robot. Midline scars or surgery is always a risk for a hernia formation, and if you’re off the midline, the risk is much lower.” 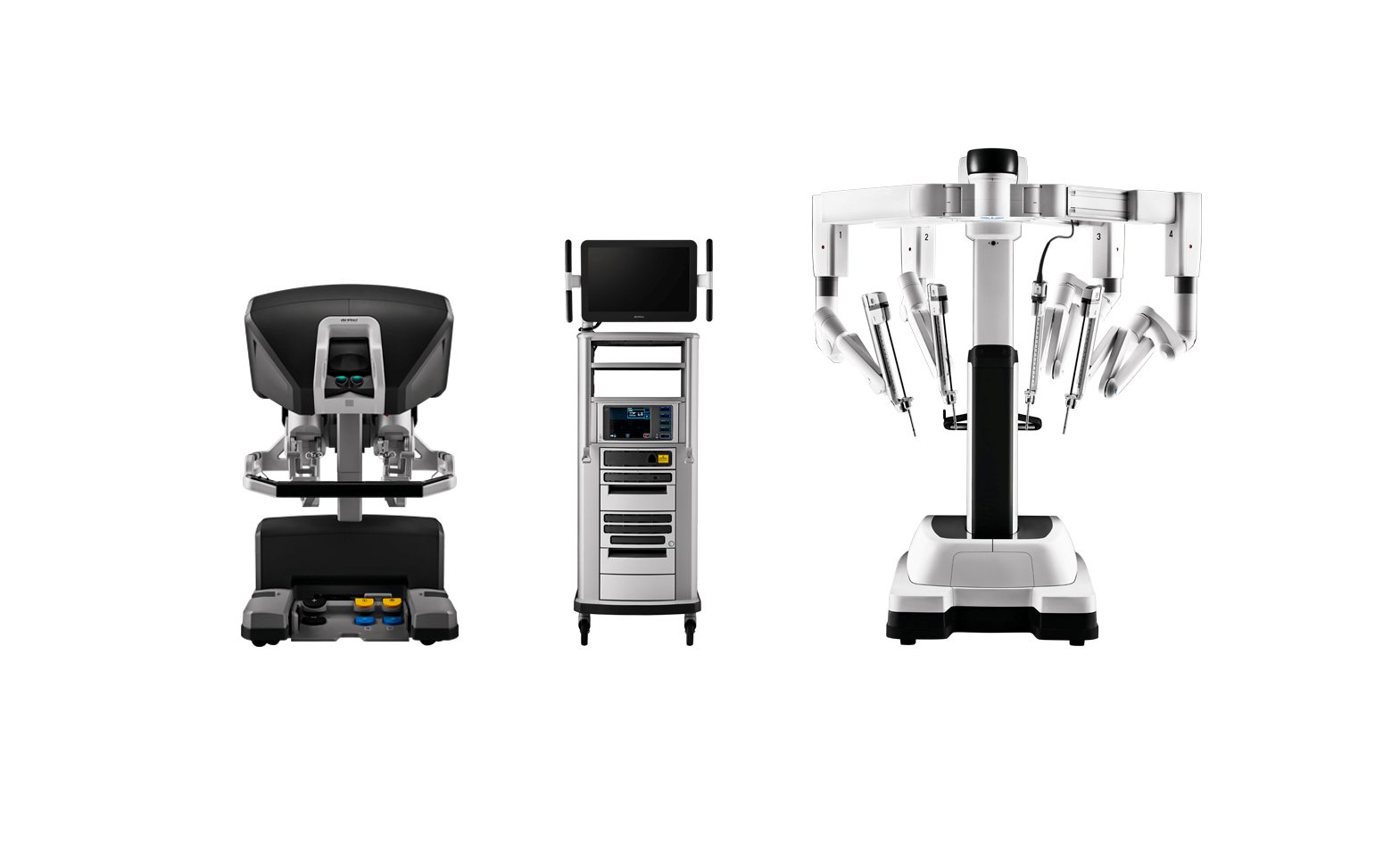 The components of the da Vinci robotic surgery system, including the surgeon console, vision cart, and patient cart

Jason and his medical team opted for robotic surgery ahead of chemotherapy. The surgeon would remove a foot of Jason’s colon and part of a lung, where his cancer had spread.

Opting for a minimally invasive surgery was an easy decision, Jason said.

“The recovery time and benefits for the surgeon were key to me,” Jason said. “I have three young boys, and being active for them and part of their lives is important to me. And as a lawyer, you want to minimize downtime. I like what I do, and I want to be there for my clients and my family.”

While Jason’s surgeon dutifully explained the benefits of robotic surgery, he did his own research, too. He wanted to understand the procedure and its impact on the body.

“I think people are willing to do whatever it takes to deal with cancer,” Jason said. “But people don’t understand the recovery side as much. How do your internal organs shift during surgery? What happens to the nerves that are there? The impact on these things really affects the recovery process.”

Jason’s surgery was scheduled for a Thursday morning. He arrived at the hospital hours early and entered the operating room around 8 a.m. Anesthesia soon hit, and a groggy Jason woke up in a recovery room some seven hours later. He stayed until Sunday.

“The surgery was a non-event for me,” Jason said. “It was a three-day weekend of popsicles and TV.”

By Monday, Jason was taking short walks around his neighborhood. Doctors say moving — but not exerting force — is important after surgery to ensure everything is healing OK.

“Mobility was limited by the tenderness of the internal organs,” Jason said. “But each day I got a little bit stronger, a little bit better.”

And as for pain, Jason said it was minor.

“I never really had any pain from the surgery, but there was certainly a tightness and soreness in my mid-section, but I liken it to a post-workout feeling,” Jason said. “You avoid quick movements, but there is no sharp pain, just the expected and easily manageable.”

Dr. Kim said, based on his experience, Jason’s results are fairly typical.

“With robotic surgery, patients leave the hospital faster, and cosmetically, it’s better for some people — they don’t have a large scar,” Dr. Kim said he’s seen. “When people walk into the office a couple of weeks later, you can’t even tell they had surgery. With open surgery, they’re wearing sweatpants, hunched over, waddling into the room.” 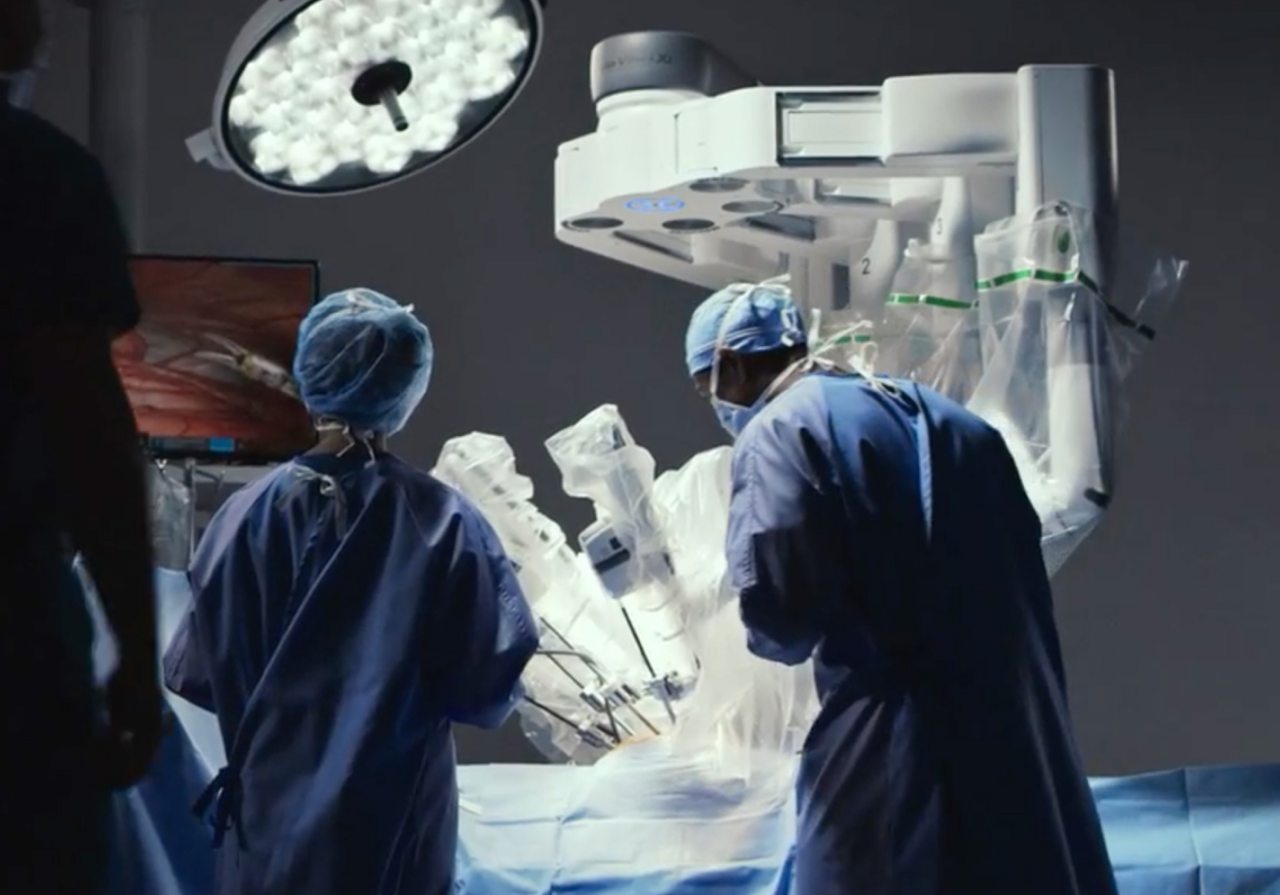 “I think today we should not be talking about elective open colon resections,” Dr. Rashidi said.

Still, finding a surgeon that performs robotic surgery can be challenging.

“When you’re dealing with cancer or a major medical issue, I think it’s worth the time and effort to find competent doctors that align with your needs, and you need to be your own advocate for that,” Jason said.

He adds that self-education is key.

“Most of the stories I hear that turned south pretty quickly are ones where the patient just went with what the doctor said and never explored whether it made sense, and is that consistent with what you’re thinking and how your body feels,” Jason said. “Stay positive and balanced. You’re a special case.”

Patients can research and ask questions to assess the surgeon’s experience and fit for their procedure. Questions may include:

Intuitive, makers of the da Vinci surgical system, also have a search tool for finding robotic-assisted surgeons near you, available here.

After all of this, you may be left with the impression that robotic surgery is the optimal surgery type. That’s not true. The best type of surgery is the one that meets your needs and is conducted by a surgeon with excellence in that style of operating.

“Robotic surgery isn’t everything,” Dr. Kim said. “If I were a patient and saw someone who doesn’t do robotic surgery but has done 10,000 laparoscopic surgeries with great outcomes, I’d have them do laparoscopic. And the opposite is true.”

Note: The experiences and perspectives of the patient and surgeons in the story are their own. Others may experience different outcomes unique to their circumstances.

This article supported by