Laura Cain: I Had to Let Him Be Sick 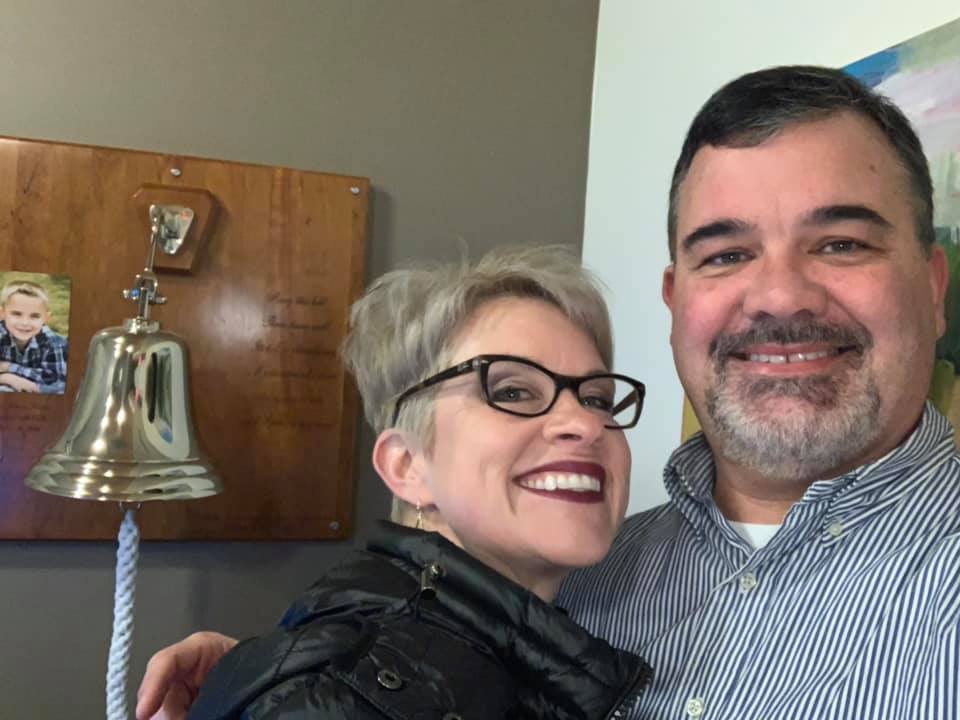 My husband and I had been married 24 years on Oct. 29, 2018. I'll never forget that day, the day after our oldest child turned 23. We had all just been together celebrating. Then, the walls came crashing down, and cancer invaded our home. It happened fast and silently, but in the end, I learned that you must take it one minute at a time.

We left for a colonoscopy in the early morning of the 29th. It was a test my husband, Jeff, had tried to postpone until December when he "had more time." He had been having symptoms since our family vacation to Mexico that summer. He tried to convince himself that he picked up a bug there, but I had a feeling in the pit of my stomach that it was something more. So, I called and made the colonoscopy appointment, and I fussed with Jeff until he agreed to go. Then, there we were, driving to the appointment that would change our lives forever.

The next two weeks were a whirlwind of tests and appointments. Doctors mouthed words I could barely comprehend because I was so shocked. Stage III colon cancer. Radiation, chemo, surgery, ostomy bag, ostomy reversal, chemo again. I took a notebook to every appointment, and my hands would shake trying to write everything down. I didn’t want to forget. My head was spinning. I cried … I cried so much. Cried to friends; cried to my family; cried to our kids; cried to my husband. Jeff never cried. He did what he always did and consumed himself with worry about everyone else. He would joke at appointments. He would greet every person at the cancer center as we went in. Even the parking attendant knew his name. Not me. I didn't want to be friendly with them. I didn't want to get comfortable there. I still want to throw up when I drive by it.

Our children were amazing. They are amazing. Our sons are 25 and 15. Our daughters are 21 and 10. Our youngest was adopted from China. She is non-verbal, vision-impaired, and autistic. She is absolutely crazy about her daddy. She told us in her way that she knew something was wrong. We look back and are 100 percent convinced she knew and was trying to tell us. I had to pull myself together and be strong for them. And I had to let Jeff be sick [TWEET THIS]. I didn't want him worrying over us. It was terrible to see the strongest member of our family get so sick. He lost 70 pounds. He was tired all the time. And he tried to act like everything was normal. I would start to worry and fret, but he would shut it down. We went on family vacations; we went to New Year's Eve events; we went to our son's college graduation — all with his chemo bag attached. It made everything bittersweet. He gave me diamond earrings for no reason. And all I could think was, "He thinks he's going to die.” It was hard to be completely happy about anything. But, I leaned on my faith, and, somehow, we lived day to day without cancer always being the center of attention.

Fast forward two years, and I am blessed to say some of the hardest parts are over. We still deal with the physical side effects of the treatment and surgery. And we still deal with the psychological side effects of facing mortality. But my husband is NED! We are learning to appreciate each other in ways we never did before. It grew all of our children up. And we feel secure enough to plan for the future again as we did before.

My biggest lesson is that even when your worst fear starts to unfold in front of you, the one you thought would make you crumble — as a caregiver — you just get up every day and take each hour as it comes [TWEET THIS]. Each minute if you have to.

Laura Cain is an elementary teacher from Kentucky who enjoys working out and reading when she's not convincing friends that colonoscopies really aren’t that scary. You can follow her on IG at @cainshep and contact her by email Lauracain1234@yahoo.com.