Into the Weeds: What You Need to Know About Medical Marijuana & CRC – Part II 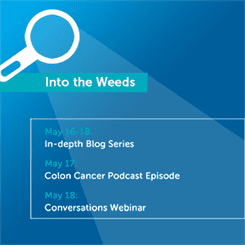 This blog is the second in this series. Read Part I here.

Cannabis: Does it Cure Cancer?

If there is one common theme in all of the literature and scientific papers, it is that cannabis and cannabinoids enhance the benefits of conventional treatment for side effect management.

For cancer patients, this is most notable in chemotherapy-induced nausea and vomiting as well as pain management.

In an article published in the Journal of the American Medical Association Oncology this year, authors reviewed the literature surrounding the treatment of cancer with cannabis. While the majority of the data came from animal trials, results were positive. For example, tetrahydrocannabinol (THC) slowed lung cancer tumor growth in mice.

Although the information is promising in animals, further research in human clinical trials is needed.

It is important to note that many people who currently claim they’ve been cured from cannabis or hashish oil have been on standard therapy at the same time (Lancet Oncology, Volume 16, October 2015).

Dr. Donald Abrams at the University of California San Francisco said, “What really upsets me the most, though, is when I see a patient with a potentially curable malignancy who is using cannabis oil instead of conventional therapy. In some situations, the window of opportunity for a potential cure may close when their cancer progresses on cannabis alone."

In other words, there is only a small window when treatment is most effective. While cannabis may be used to enhance cancer treatment, at this time, there is no evidence to suggest it should be used as a treatment in and of itself. In fact, the time spent attempting to use cannabis as a “cure” may result in the cancer progressing to a stage where it is more difficult to treat.

Register for our upcoming Into the Weeds webinar on Wednesday, May 18!

Join us tomorrow for Part 3 of our In the Weeds blog series to learn what current research says about medical marijuana.