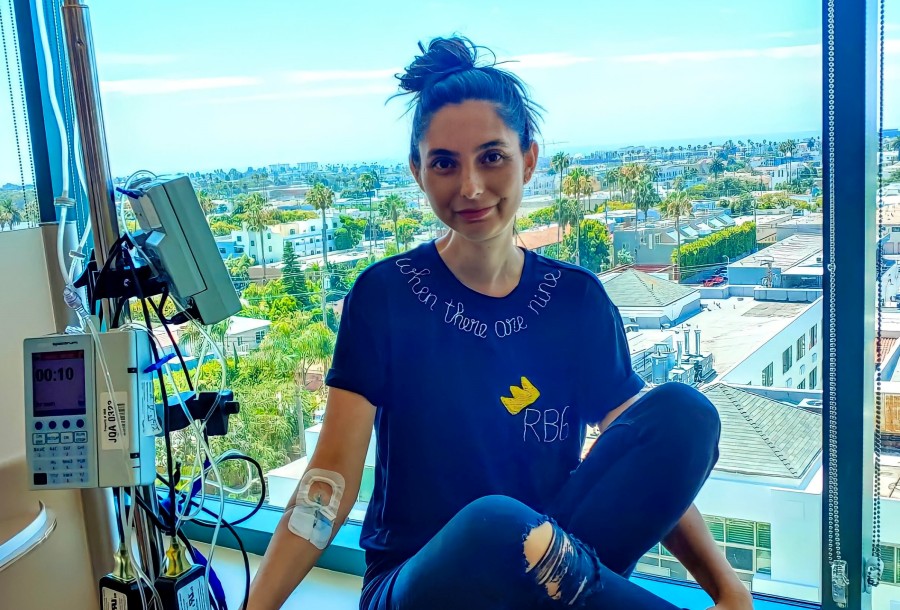 There are many things that run through your mind when you get diagnosed with stage IV cancer.

For me, one of the most prevailing thoughts was, this is so stupid. I was a healthy 38-year-old woman who was a vegetarian, didn't really drink, didn't smoke, and was in pretty good shape. Now, I was sitting on my bathroom floor having just thrown up the CT contrast, listening to my doctor over speakerphone tell me that I had a tumor in my colon and spots on my liver. The thing that made it tragic to me was the person holding the phone was my father.

A week after I was born, my mother was diagnosed with Non-Hodgkins Lymphoma in her bowel and died four months later. At age two, I was diagnosed with adenocarcinoma of the submandibular salivary gland. The tragedy was that my father had to deal with all of that, and now he had to deal with this. He held the phone, and after he heard my doctor speak he whispered, “It’s happening all over again,” and it broke my heart.

I had seen many gastroenterologists over the years. I've been tested for Celiac multiple times. I was a Milk of Magnesia and Desitin child, and, as an adult, I often had stomach issues that I brushed off as being lactose-intolerant or having IBS. I started having trouble going to the bathroom and went to see a GI, who wanted to do a colonoscopy to see if I had Crohn’s or Colitis. The problem was he was leaving the network the next week and insurance told me to find a new doctor. I got a new referral for a new doctor, but he didn't want to do a colonoscopy — he also didn't want to run any new tests. He looked at what the previous doctor had done and said it was bacterial overgrowth, and wanted me to take an antibiotic every night for six months to a year.  He then said, “This is what I think is wrong with you, and I'm never wrong.” I called his office after having surgery to cut out half my liver and part of my colon to tell him that he was in fact wrong.

I was on set working when I felt like I had pulled a muscle in my side, I googled my symptoms, and it said I had gas. My sister later said that I was probably the only person who googled their symptoms and wasn't told that I had cancer. That Monday, I started getting pains from my left side shooting towards my belly button. They only lasted a few seconds, at first, but each day, they got longer and more painful. A few days later, I woke up in the worst pain. I got up and drove to work and when I got there, I couldn't stand up straight. I was sent home and on my way, I called my dad and he said he would fly down the next day.

The next day, my doctor called and asked me to get a CT scan. We made an appointment for that afternoon. I met up with my dad when it was over, and I was in pain and extremely nauseous from the contrast. We drove to Rite Aid to pick up the prep for that night, and I couldn't even leave the car. We started driving home, and my doctor called and said, “Oh, you are driving, I'll call you back later.” I was in too much pain to think anything other than that can't be good. I can only imagine what my dad, who is a doctor, thought of that. We made it back to my apartment, and I had to run to the bathroom as soon as I laid down. That is when the doctor called back and my dad came in.

Twenty minutes later, he called again to say my room was ready, so I drove us to UCLA (which has valet parking - thanks LA). I don't remember if we said anything on the way, but I do remember taking stock of my life and telling myself how lucky I was for all the things I had been able to do and all of the places I had been. I had wanted to do something special for turning 32 since that was how old my mom was when she died. So I visited my seventh continent just before my 32nd birthday. Once we were checked in at the hospital, we were escorted to my room. As we stepped off the elevator, the hallway was empty, except for one woman with no hair and a blanket wrapped around her, walking with her IV pole. Once in my room, I met my nurses, and the night nurse said we were going to be doing three tap water enemas before my colonoscopy in the morning. I said goodnight to my dad, and I realized that all vanity had gone right out the window.

The next morning, I was taken to get a colonoscopy, and still in a state of shock after being told I probably had stage IV colon cancer. I woke up from my colonoscopy, which also got a piece of the tumor to biopsy and to place a stent so that my colon wouldn't be obstructed anymore.

I left the hospital a few days later with a vague plan. The chest CT was negative for spread to my lungs, and they confirmed I had a tumor in my colon and four spots on my liver. My liver surgeon, who was my favorite, showed me my scans and said, “Let’s cure this thing.”

After three days in the hospital, he was the first doctor to say those words to me. I said, “You can do that?” And he said, “We can try.”

I had thought that there was no cure, that once it spread anywhere it was only a matter of time. None of the other doctors had even hinted at it being curable. I googled colon cancer in younger people, and the first thing that came up was an article titled “Why Are So Many Young People Dying of Colon Cancer?”

That is not the first thing you want to read. Based on how I was spoken to, I thought death was imminent. But my liver surgeon gave me hope. He said I would probably do a few rounds of chemo and, as long as everything was the same or better, then he could do surgery, with more chemo after. Time moved in a very strange way. Some moments felt like they flew by and some crawled. Those ten days after getting out of the hospital before I could get an oncologist appointment felt like an eternity. The more people told me that I was going to beat this, that I was the strongest person they knew, the more convinced I was that I was going to die.

The character in the movie doesn't normally survive her cancer — she dies and all those around her have their lives become more meaningful because of it. But here I am surviving! I've lost friends I've made with the same diagnosis, and it's possible that I will lose more. There is no guarantee that mine won't come back. I have had one year clear but will need nine more before I can say I'm cured. I live in a strange limbo where I am a cancer patient who at the moment doesn't have cancer.

A phrase I adopted was from Game of Thrones. Arya's fencing teacher would ask her “what do you say to the God of death?” and she would answer “not today.”  I don't know what will happen in the future, all I know is … Not today, cancer, not today.

Elizabeth Wachsberg is a 40-year-old woman from California who enjoys being on film sets when she's not telling everyone she knows to get a colonoscopy. You can follow her on Twitter and Instagram.