Diverticulitis was not the right diagnosis 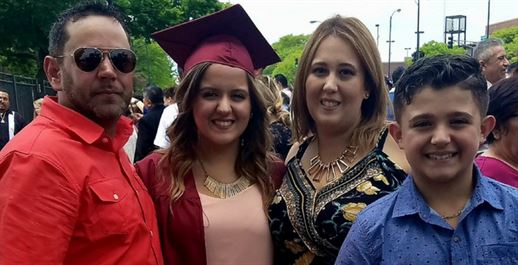 Chicagoan Melissa Hernandez knows that cancer doesn’t care how old you are. In late 2016, the 38 year old started suffering severe pain in her abdomen. The pain became so intense and frequent, she eventually made a trip to the emergency room in February of 2017.

“Initially, the doctors thought it was diverticulitis,” Hernandez said.

As a result, Hernandez was prescribed antibiotics and told to change her diet. The pain went away around mid-March, but then blood appeared in her stool. A physician ordered a colonoscopy at the end of April, which revealed a tumor in her colon.

“No one ever suspected that it was cancer,” Hernandez said. “Once I found out, my mind was racing. I didn’t know how to tell my kids. My daughter was graduating from high school. So much was going on at that time.”

She underwent surgery in May of 2017 for colorectal cancer, during which doctors removed a foot-and-a-half section of her large intestine. She followed up surgery with oral chemotherapy.

After her diagnosis, Hernandez researched ways to get involved in the cancer community, including awareness walks. During her research, she learned about the Chicago Undy RunWalk.

The Undy RunWalk is a family-friendly 5K organized by national non-profit Colorectal Cancer Alliance, whose mission it is to end colorectal cancer within our lifetime through providing support services, awareness of preventive measures, and funding critical research. The Undy RunWalk is held in 22 cities across the U.S.