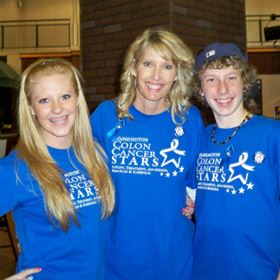 In 2005 I was diagnosed with stage IV colon cancer. I had already lost my father and a good friend at age 37 to the disease, yet I had no idea of the guidelines for screening, the importance of family history or the symptoms. With my family history, I should have had a colonoscopy at age 30. When I presented with blood and change in bowel habits I should have been sent straight to colonoscopy. Instead, my doctor dismissed my symptoms because of my age.

While no one wants to be diagnosed with cancer, it helped me to see what I needed to do with my life going forward. My personal experience with this disease encouraged me to get involved in the fight and save lives. I’ve made it my personal mission to help knock out colon cancer.

Following my diagnosis, March was quickly approaching. I wanted to do something to get colon cancer recognized. After brainstorming, I realized that although people associate breast cancer with pink and heart disease with red, no one seemed to know our color was blue. So, I thought a Dress in Blue Day would be a great way to start getting our blue associated with the cause.

I took the dress in blue idea to the task force I was on and they weren't interested. But did I accept defeat? Of course not. I moved forward with it on my own. I then went to my children’s school and spoke with the principal; she was hesitant because she didn’t want to offend other families dealing with cancer, but I wouldn’t take no for an answer. I stated the facts and showed her how we could save lives by spreading this awareness.

On that day in March, students who normally wore uniforms to class were allowed to wear a blue outfit of their choice if they made a $1 donation to colon cancer awareness. To encourage participation and educate students’ families, I distributed educational materials and screening guidelines in the days leading up to the event. I got the media involved, too. Local news outlets showcased the event and photographed the children in blue. I even worked with our local government, receiving a proclamation from the Mayor of Seattle recognizing it as Wear Blue for Colon Cancer Awareness Day.

In 2009 I brought the concept to the Colon Cancer Alliance. The organization declared the first Friday in March Dress in Blue Day and took the program nationwide, raising awareness of colon cancer, highlighting the spirit and courage of survivors and their families and honoring the memory of those lost to the disease.

The more attention we can bring to this preventable disease, the more lives we can save. Colon cancer is one of the few cancers that is largely preventable with recommended screening. To think that we can change the statistics and saves lives by educating people about screening is pretty amazing.

My advice to my fellow advocates is to never be afraid of getting involved and starting your own thing. I certainly learned that it’s well worth it. Know your facts, be passionate, speak from your heart and don't be afraid of being told no. Start with the connections you have in your community, go door to door if you have to, and grow you efforts from there.

Partnering with the Colon Cancer Alliance and launching Dress in Blue Day nationally has grown my little idea into a nationwide event. The more we all work together in a unified effort, the more people we are educating and the more lives we are saving. That’s what it’s all about. I am overjoyed to see how far this concept has come. Thank you to all who participate and embrace Dress in Blue Day. I can't wait to see what people do this year!

Anita "goes blue" with friends at Seattle Cancer Care Alliance, the hospital where she had treatment.[/caption]

A sorority at Washington State University goes blue in honor of Anita for Dress in Blue Day 2013![/caption]