Hero of the Month: Dottie Mattern 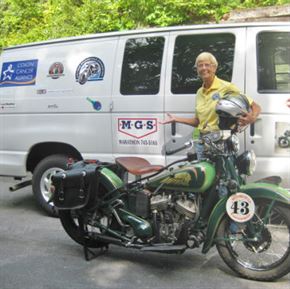 At 70 years young, Dottie Mattern is in better physical condition than most 50-year-olds, but she is not taking that for granted as she makes final preparation for the 2014 Motorcycle Cannonball coast-to-coast endurance ride. This 12-year colon cancer survivor takes off from Daytona Beach, Florida on September 5th and will make the 4,150 mile trek to Tacoma, Washington on a quest to raise money for the Colon Cancer Alliance and Antique Motorcycle Foundation. Get to know Dottie and find out why we're utterly inspired by this cancer warrior and motorcycling grandmom.

And her love for motorcycling has never wavered. A few years ago, as a 62-year-old grandmother (five times over), she set a motorcycle speed record of 94.7 mph at the Maxton Mile riding a 1937 Indian Scout. Her next challenge: on September 5th, she's going to be kicking off the 2014 Motorcycle Cannonball Endurance Run, a 16-day cross country ride for motorcyclists on vintage bikes. She’ll be peddling a 1936 Indian Sport Scout, a bike she’s had for more than 25 years, to raise funds for the Colon Cancer Alliance and Antique Motorcycle Foundation. Added bonus: she’ll be celebrating her 70th birthday!

Dottie asks for prayers and good wishes as she embarks on this exciting challenge, recognizing the physical, mental and emotional test of the Cannonball journey. But man, is she pumped to get on the road!