Volunteer and survivor Jim Lione: The fire that keeps him going 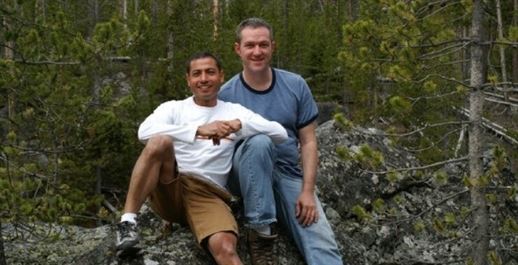 Jim Lione has a fire inside. A fire that first formed when he learned about his stage IV colon cancer diagnosis in January of 2009. Today, that fire drives him to provide support to colorectal cancer allies through Blue Hope Nation—a Facebook support group moderated by the Alliance.

“My fire, when I was diagnosed, was that I was just scared to death,” Jim said. “We had nothing to rely on. My husband Luis and I didn’t know anyone who had this cancer. We felt very alone. In 2009, we didn’t know groups like Blue Hope Nation existed, nor did we find groups like that on Facebook for help or information. There was nothing!”

But Jim had his rock, his loving husband Luis.

The doctors thought they had eliminated Jim’s cancer in March of 2009, but in June Jim requested a follow-up scan due to prolonged bowel movement problems. They found eight individual tumors in his lungs, and the tumor in his rectum had returned, keeping Jim at stage IV.

“I asked if there was any stage after that, and my doctor said, ‘no,’” Jim said. “It was at this point that I realized, ‘Oh shit, this is real.’”

The doctors then told Jim dire news. If treatment didn’t work this time, they estimated he would only live about two more years.

“My husband and I were a year into marriage and already facing mortality,” Jim said. “We thought, ‘Who do we talk to about this?’”

Jim and Luis relied on family and very close friends to be their support team.

For the next year, Jim did chemotherapy and radiation at the same time. In late 2010, Jim was given a colostomy due to post-radiation problems. It was in 2014 that Jim’s oncologist declared that he was cancer-free but not NED for another year.’

In September of 2015, due to pain and on-going post-radiation issues, Jim had a surgery too close his rectum, which he now calls his “Ken butt,” like the plastic doll.

The cancer was gone, but the pain from treatment was not. Looking for community again, Jim was guided to join Blue Hope Nation in November of 2016. He had finally found thousands of people to talk with his nation of allies.

“He was a natural fit,” Stephen said. “People really gravitated to him, so it was easy to put him as a volunteer administrator.”

Jim was ready to get on board as well.

“I said to Stephen, ‘I’m ready to help,’” Jim said. “I came aboard with a background already and Stephen felt comfortable with how I was handling patients and survivors.”

During his time as both an active member, administrator and participant in the Buddy Program, Jim has gone above and beyond to provide support to the community in Blue Hope Nation.

When a fellow ally and friend of Jims, Laurel, needed a place to stay in southern California while attending a clinical trial, Jim offered up his spare bedroom. He now calls it the “Blue Hope Room” in honor of her passing. Jim also donated in 2018 a Bell of Hope for his cancer center.

Of course, it’s not always an easy role.

When asked to sum up why he continues to volunteer, Jim says:

“When I lose someone close (through Blue Hope Nation or through the community) I lose sleep over it. My husband has asked, ‘Why are you in these groups then?’ I say that the passion and fire that’s behind each of them and what keeps them going—keeps me going.”

If you’re interested in volunteering with the Colorectal Cancer Alliance, please fill out this application.