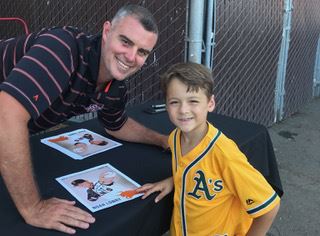 Under the stadium lights of the Sonoma Stompers, an independent professional baseball team in California, Casey Thornhill took the mound with his son, Greyson, and became a fundraising DIYnamo for the Colorectal Cancer Alliance.

Baseball had been an important part of Casey’s life. When he was a boy, it’s how he connected with his dad. In college, it turned his life around, leading him to quit smoking and get fit. He was nearly drafted as an outfielder by the St. Louis Cardinals.

“Baseball was a game-changer for me in a lot of ways,” Casey said.

On July 5, 2018, Casey pursued baseball again to help change other’s lives, and it all started with a simple email.

“I wrote to the Stompers to see if there was any way I could pitch for them and call it a colorectal cancer awareness night, making it a benefit for the Alliance,” Casey said. “They said they were all for it.”

Casey’s experience with colorectal cancer began with a year-and-a-half of stomach pains. Blood appeared in his stool, and certain foods would make him curl over from pain.

“I kept going to the doctors, saying it was like a demon was trying to get out my stomach,” Casey said. “They told me it was gas, or a gluten allergy, so I took their word for it and believed them.”

But then he went to the emergency room twice in three days for pain. The second time, an x-ray revealed a 90-percent blockage in Casey’s colon, leading to emergency surgery and a stage III diagnosis.

“I did six months of chemotherapy—that was one of the worst things I’ve ever had to go through, especially since I had a 7-year-old at home,” Casey said. “Every part of me wanted to fight for him, too.”

While in chemotherapy, Casey said he had a lot of time to think about how he could support other people like him, which led him to the Alliance. He found the Sacramento Undy RunWalk and a personal connection with the Alliance staff.

“I felt like the Alliance cared about people making a difference,” Casey said. “They were calling me, giving me personal cell phone numbers—they truly, authentically cared for people. So that was the thing that sparked the baseball idea.”

As thrilling as taking the mound was for Casey and his son, the event also included a raffle and an awareness table, staffed by Alliance volunteers who passed out resources to curious baseball fans.

“For the raffle, I made a real short letter saying who I was, what I was doing, and why,” Casey said. “I got tons of people who donated.”

Even the Giants donated a signed baseball and sent former pitcher Noah Lowry to sign autographs.

In the weeks leading up to the event, Casey and Greyson practiced pitching. When the time came, they approached the mound with “Get Back” by Zebrahead playing, a throwback to Casey’s walk-out song during college. An announcer introduced the pair and their cause.

Casey was permitted to pitch until the rival team got a hit. It started off pretty well: strike one, strike two.

“But then I threw a curve ball in the dirt and ended up walking him,” Casey said.

So Casey left the mound, but not before hundreds of spectators learned about colorectal cancer and bid on raffle items, raising for the Alliance more than $800.