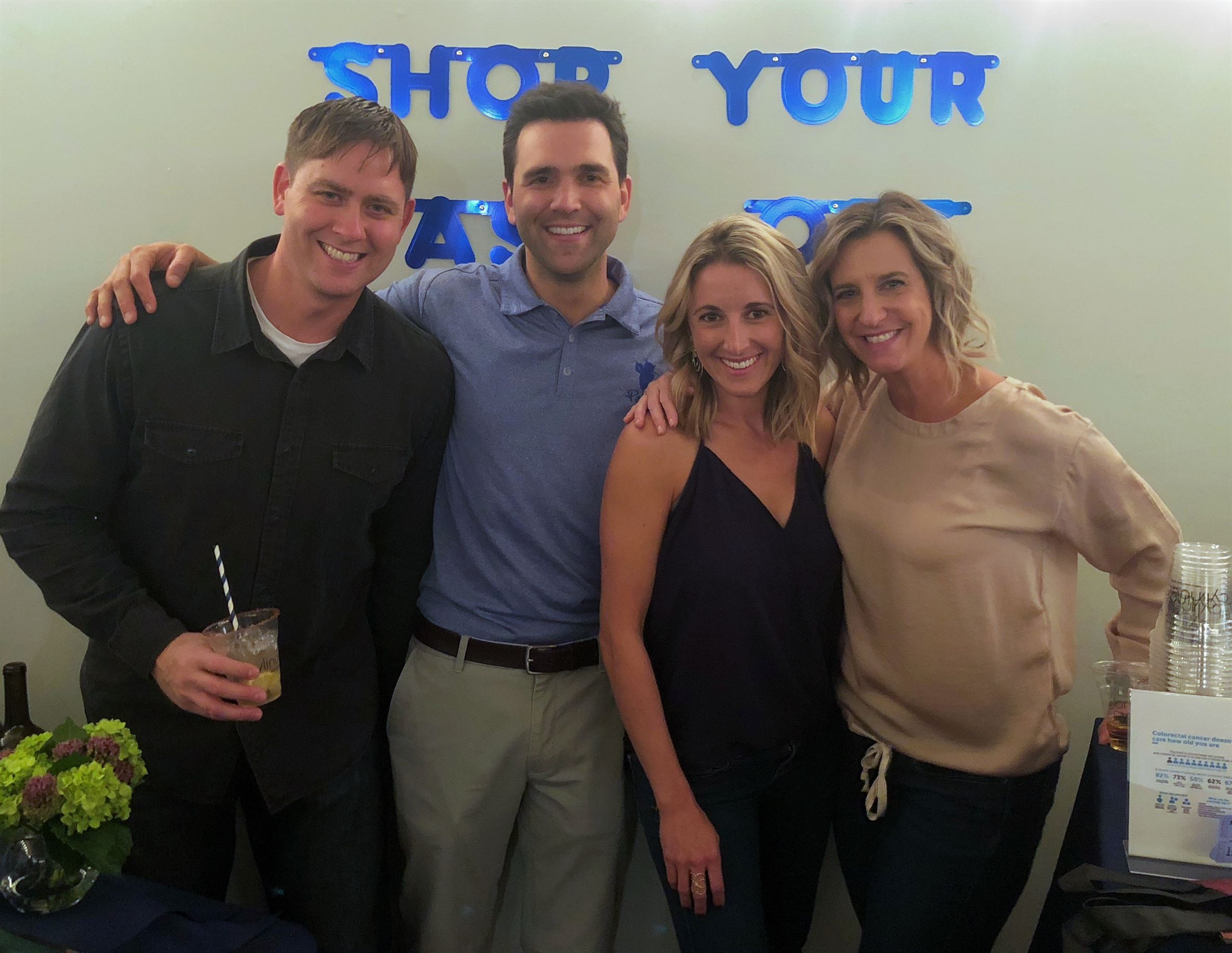 About 100 shoppers had come to “Shop Your Ass Off,” a fundraiser by Mike and Fallon Nelson. Swirling from room to room in the Nelson’s cape, family and friends bagged items like a custom wine from Napa, Stella & Dot jewelry, Peach athleisure clothing, and doTERRA essential oils.

After vendors totaled their sales and guests took home their raffle baskets and silent auction items, Mike and Fallon had just over $8,000 to donate to the Colorectal Cancer Alliance, an incredible inaugural #DIYnamo event.

“It was a lot of work, but we had a lot of support and it was a big success,” Fallon said.

Mike—“the picture of perfect health,” his wife said—is in treatment for stage IV colorectal cancer. The medical device salesman, who loves golf and wears a big smile, shocked guests with his vitality and age.

Mike is just 36. He represents a growing trend of young-onset colorectal cancer among Americans. Today, more than 1 in 10 colorectal diagnosis are in people under age 50.

“I think it’s like anything, if you become more educated about it, you start to see commercials on TV about Cologuard or whatever it may be,” Mike said. “The more people are put in front of what colon cancer is, the more they’ll be aware and proactive.”

In late 2016, Mike started having stomach aches and issues in the bathroom. He chalked it up to stress and too much coffee. By Spring 2017, the pains were worse and more frequent. And by summer, Fallon had “the talk” with him, convincing Mike to see a GI doctor, just a couple weeks before a family vacation to Hilton Head.

After numerous office visits, ruling out issues like Celiac disease, food intolerances, and small intestinal bacterial overgrowth (SIBO), the “GI took a look up there and said, ‘You need a colonoscopy right away,’” Mike said.

The procedure revealed a big tumor and an imperiled vacation.

“The doctor, we love him, said, ‘I hate to tell you this, but you’re not going anywhere,’” Fallon recalls.

Within 24 hours, Mike had a CT scan that confirmed what the doctor suspected: The cancer was in Mike’s colon, lymph nodes, liver, and one lung.

Determined to do something about this unfair disease that takes more than 50,000 lives each year in the United States, Fallon first suggested a golf tournament to raise awareness and funds for the Alliance’s research, prevention, and patient and family support programs.

“Mike convinced me it was a terrible idea,” Fallon said. “He said, ‘Let’s see where things are in a year. Right now it’s too much, too soon.’”

But next came the perfect idea. By talking with friends who are consultants for online direct-to-consumer brands, selling jewelry, essential oils, beauty products and more in peoples homes, Fallon formed the idea to have a party for colorectal cancer awareness.

Fallon tapped her network for support. Her aunt designed the invitations. Her mother made holiday wreaths to sell. Her sister in law put together a team of family and friends to make all of the food. Their friends volunteered to pour drinks and manage the bar. They even had family who brought in and set up a sound system for music and announcing the raffle and auction winners. The couple set up tables throughout their home, where guests could find perfect holiday gifts.

“Initially, I thought it’d be one or two vendors here, but within a week of mentioning the idea to others, it grew quickly and we ended up getting nine,” Fallon said.

And it all revolved around a custom-labeled wine, called Pajarito, created by a childhood friend of Mike. The wine joined gift baskets and silent auction items on blue-and-silver adorned tables.

An important element of the event’s success, Fallon said, was being able to capture and document the shopper’s generosity with a Square card reader, a device that lets anyone accept credit cards with their iPad or iPhone.

“People will swipe in a heartbeat to raise money for cancer,” Fallon said.

The couple already have their sights on next year.

“We’re thinking a golf outing for the boys during the day and shopping event for the women at night,” Fallon said.

Whatever they pursue, we know they’ll be successful. Mike and Fallon are #DIYnamos, after all.

“I just like a sense of normalcy,” Mike said. “Just because I have to go through chemotherapy, we don’t want cancer to hinder us in our relationship, our goals, or our future. And I have a pretty good motivator ... Fallon.”