Marietta Barrett: She would be smiling 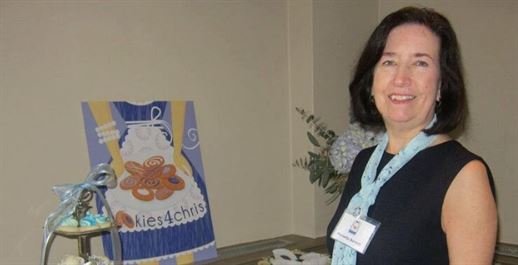 If the story of Cookies4Chris, an annual fundraiser held in memory of Chris Sapienza, were a movie, it would start during the Vietnam War era.

Marietta Barrett, the organizer of Cookies4Chris, had met Chris in college at Duquesne University in 1968 and became friends. When Marietta's brother Frank was drafted, both she and Chris sent care packages filled with letters, items from home, and, sometimes, cookies.

When Frank returned home from war, he and Chris started dating. Eventually, they were married and had four children, including Michael Sapienza, CEO of the Colorectal Cancer Alliance.

Chis became known as a lover of cookies and baking. She reinvented herself professionally several times. She was a musician, a music teacher, a small catering business owner, and then a home decorator.

“She was known for her kindness, her upbeat personality, and her creativity,” Marietta says.

Chris spent most of her adult life in the Washington, DC, area, but kept alive friendships with many people in the Pittsburgh area and her husband’s family.

She was diagnosed with colon cancer in 2006, fought it for three years, and passed away from the disease in 2009.

Soon thereafter, her son Michael founded the Chris4Life Colon Cancer Foundation in the DC suburbs of Virginia to raise awareness. This foundation eventually merged with the Colorectal Cancer Alliance.

But all the people who loved Chris in Pittsburgh felt a need to honor her memory there, too. Chris’ friends and family began brainstorming, and they realized that Pittsburgh was famous for its “cookie table” tradition and Chris was an excellent baker. She loved making Italian cookies, miniature lady locks, and pecan tassies. It was obvious what they had to do.

“If Chris visited us here, she would be smiling because it’d feel so perfect, and she would be baking and displaying all of these cookies herself,” Marietta says.

This year, Cookies4Chris enters its eighth year, but remains a cozy luncheon and vendor show, with a personal feel. As people enter the event, they choose about a dozen artisan cookies to take home from more than 50 bakers.

Attendees can also peruse wares from local vendors, sip a blue hope drink made of champagne and Curacao, see a display of paintings from cancer mpatients curated by Lilly Oncology, and participate in silent and basket auctions.

The program itself includes remarks by an ambassador of hope—this year, a young-onset colorectal cancer survivor—and a doctor from the University of Pittsburgh Medical Center, Dr. Edward Chu. Michael often says a few words, too.

“Our goal is always awareness, because as close of a friend as Chris was to me, she never told me about the severity of the issue, or even the fact that she was going for a colonoscopy,” Marietta says. “We wanted to make this something where people would feel comfortable talking about cancer, and we achieved that through this event.”

“I’m very pleased,” Marietta said. “People have asked us to get bigger, but we couldn’t do things the way we do it. If we got bigger, we couldn’t be as personal and family-event oriented.”

Funds raised support the Alliance’s programs and a legacy pledge to the University of Pittsburgh Cancer Institute, supporting colorectal cancer research by Dr. Chu and colleagues.

In Pennsylvania, the incidence rate for colorectal cancer is 14 percent higher than average, making Cookies4Chris an important event in a state with increased risk.

“I think this event has saved lives because people will say they’ve made their appointment or talked to someone about it,” Marietta says. “No one wants to talk about colon cancer, but they do want some cookies.”

In March, we observe National Colorectal Cancer Awareness Month.  Join us  as we build our nation of passionate allies, fiercely determined to end this disease within our lifetime.