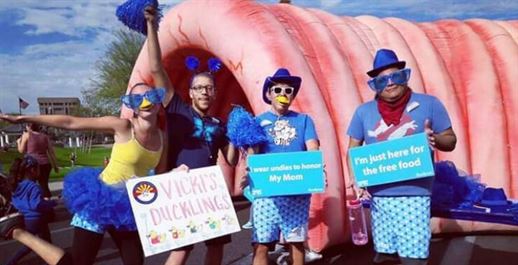 In usually dry Phoenix, Arizona, no one expected to get wet at the 2016 Undy RunWalk, least of all Loren McCabe, volunteer event chair of the Phoenix Undy RunWalk Engagement Committee. He saw the weather and knew the day would be a perfect one for running in undies to raise awareness for colorectal cancer.

But the water didn’t come from the sky.

“Everyone was just sitting and getting ready to watch the race at the Phoenix Capitol lawn when the sprinklers went on,” threatening to drench the crowd, Loren said. “The race was going to begin in thirty minutes, and my friend and I started running around trying to find the sprinkler switches and turn them off … thankfully we were able to get them off before the race, but the volunteers were freaking out!”

The sprinkler incident has become one of Loren’s favorite memories from the Undy. Loren has lived in Phoenix for the past 10 years and works as a landscape designer. He began his involvement with the Phoenix Undy in August of 2014, six months after his mother, Victoria McCabe, passed away from colon cancer at age 51.

“I thought, if there is a run for breast cancer, than there has to be one for colorectal cancer, so it was just a matter of me Googling, and I found the Phoenix Undy,” Loren said.

Victoria was diagnosed with colorectal cancer at age 48, when Loren was in his junior year of college at Arizona State University.

“It was stage I, but it progressed really fast,” Loren said. He remembers his mother wanting to stop treatment around the time of his graduation, telling him, “I want to see my son graduate.”

“She stopped treatment a little after my graduation in June of 2013,” Loren said. “After getting results that the cancer had spread to her liver and lungs, we think she then decided to stop treatment. Doing treatment again was a lot.”

In February 2014, Victoria passed away. Loren’s grandfather and great grandmother also died from the disease. 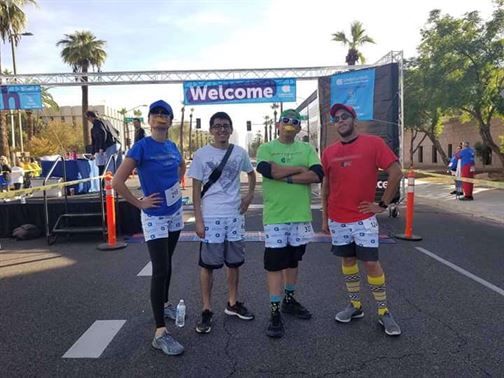 When asked about his first Undy experience, Loren’s mind goes to the famous boxers that each person who registers gets to wear: “They were blue and yellow and I remember thinking … these are really ugly ... but I still wore them.”

(The Alliance recognizes our boxer designs aren’t for everyone’s sense of style, but they do get a lot of attention!)

A few of Loren’s friends attended that first year, too, along with some of his mom’s friends.

“It was very emotional,” Loren said. “I know I broke down at some point … I was around people that had experienced the same thing my mom experienced. I think the memorial wall—that’s where I broke down.”

The memorial wall is a signature element of each Undy race, where allies write for whom and why they are running.

Loren officially took on a volunteer role in 2015.

“I think I said I was interested in volunteering and somehow got invited to a volunteer open house—a volunteer named Erin invited me to,” Loren said. “I started talking to her and learned she had experienced the same thing—that she had lost her father to colorectal cancer. It was someone I could relate to, and I thought, ‘Yeah, I’m all for helping this.’”

This year will be Loren’s second year as event chair of the Phoenix Undy RunWalk Engagement Committee.

“As event chair, you’re the main person to contact on a local level about the race, you know the layout of Phoenix and are reaching out to gain sponsors,” Loren said. “We do fundraising events. We really do everything we can on a local level to make the Undy successful.”

When asked why people should volunteer at the Undy RunWalk or with the Alliance, Loren says:

“It’s a great cause. It’s very rewarding and fulfilling, and you meet a lot of interesting people and hear a lot of stories. At the end of the day, if I knew the information about colorectal cancer that I do now when my mother was in treatment, it would have made things easier. The Alliance does so much to help caregivers and survivors, not just patients. I realized quickly there is a lot more to this organization, and I got to help.”

To join one of our 21 Undy RunWalks across the country, click here. If you’re interested in volunteering, fill out this application.