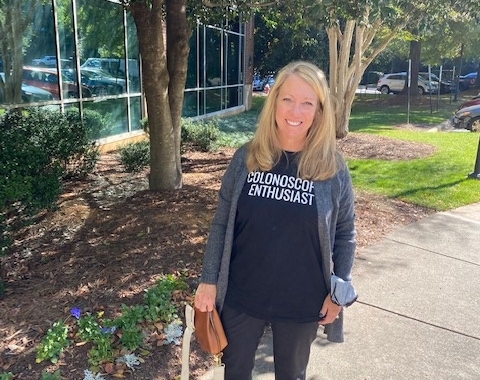 Karen was born and raised in Pittsburgh but has lived with her husband in the Raleigh, North Carolina, area for a number of years. Having spent more than 20 years in the pharmaceutical industry, Karen said she “was good about routine screenings and prevention and had yearly mammograms and pap smears.”

In 2019, Karen turned 50. She knew it was the age for getting a colonoscopy (since then, the recommended screening age starts at 45 for people at average risk). However, her colonoscopy appointment kept getting pushed out further.

By the time she had her colonoscopy, she was 51. She had no family history of colorectal cancer and no known symptoms. The only thing that was a little irregular was a periodic occurrence of constipation. Karen blamed her hectic travel schedule for work and her tendency not to hydrate as much as she should.

Karen wasn’t particularly worried about getting the colonoscopy procedure. She assumed nothing would be found and that life would carry on. But the doctor found a cluster of polyps that needed a colorectal surgeon to remove.

Again, Karen wasn’t overly worried. After all, that surgery, in October of 2020, would remove the polyps and she would be healed in time for Thanksgiving. She was much more focused on planning for the holidays which she was excited about hosting.

Unfortunately, that next surgery revealed that Karen had stage III colon cancer. 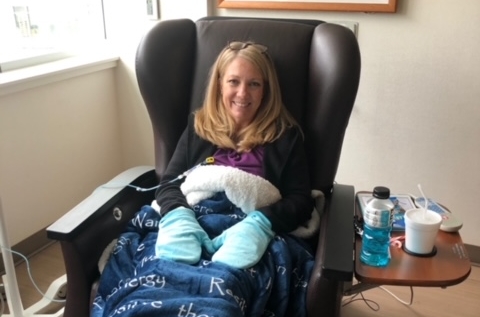 Right from the start, Karen was determined to be vocal about her cancer. The fact that she worked in the medical field and yet knew practically nothing about colorectal cancer was telling to her. She wanted to get the word out about the disease, particularly about preventing it from happening in the first place. Karen said people shouldn’t be ashamed to talk about their colon. “It’s a part of our body, an everyday process,” she said.

So, throughout her treatment of 74 days, Karen made her story public on her social media. She took that all-important number — 74 — and made it her goal to try to influence just as many people to get their colonoscopies. Karen exceeded this goal — at least 95 people had a colonoscopy because she shared her story. Several of these people had pre-cancerous polyps removed, potentially preventing cancer. 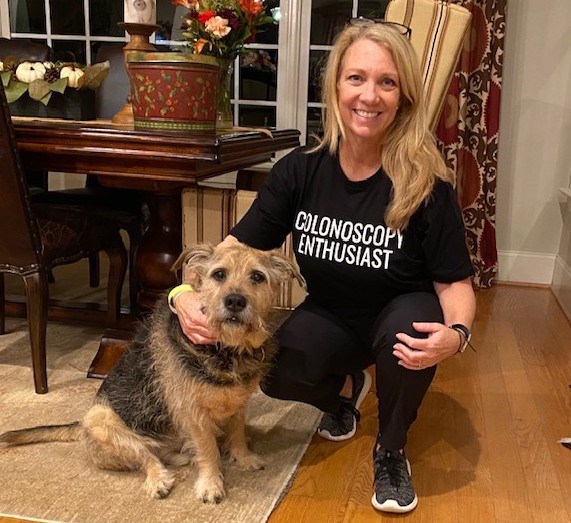 Not everyone feels the same way about sharing their cancer experience. Some tend to be much more private. After treatment, Karen signed up with the Colorectal Cancer Alliance’s Buddy Program, and she became a support person for others with colon cancer.

One of them, Karen said, had done the opposite of her, going through the bulk of her treatment in secretive silence and isolation. Karen offered her a different perspective, though: People want to love and help you. The woman took her advice and was utterly changed by it. She ended up mending relationships and reconnecting with family.

With Thanksgiving approaching, Karen said she is so grateful to have the love and support from her family and friends during her journey and is committed to advocating for screening and prevention in the years to come.