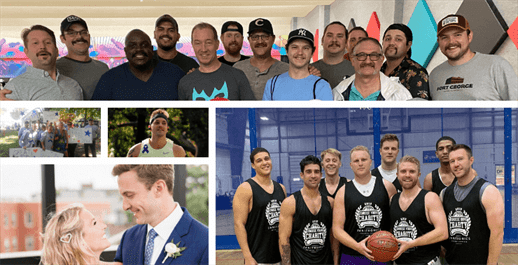 The Colorectal Cancer Alliance’s individual fundraising program, DIYnamos, empowers allies to fundraise their way. Allies are encouraged to employ their own interests and expertise to plan unique and meaningful fundraisers that support the Alliance’s lifesaving work to screen, care, and cure colorectal cancer. This year brought many such fundraisers, and we could not be more appreciative of the dedication and time each one involved—we are immensely thankful.

Not sure what a DIYnamo fundraiser looks like? Here are five excellent examples from around the country: 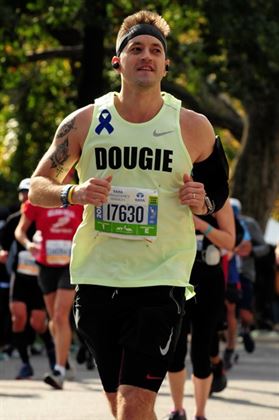 Doug Robertson brought the Colorectal Cancer Alliance’s mission to the biggest marathon in the world—the New York City Marathon—in honor of his father, who he lost two years ago to colorectal cancer.

“When he died, I not only lost a father, but my mentor and hero,” Doug said. “I would give anything for the phone to ring and hear his voice say, ‘Hey Dougie … ’ one last time.”

Doug’s father, Douglas D. Robertson, was a physician and a scientist. A resident of Georgia and a graduate of both Harvard and Johns Hopkins universities, he had a diverse and respected career in innovative research, clinical care, and education.

For his DIYnamo fundraiser, Doug promised to complete the New York City Marathon in a time under four and a half hours in exchange for a donation to the Alliance—and, impressively, the marathon would be his first race ever.

“My lack of experience in racing inspired people to donate to the cause,” Doug said. He promoted the fundraiser through social media, email, and word of mouth. People were able to donate directly through a tribute page he had created on the Alliance website.

In all, Doug raised $11,550 to help fund the Alliance’s research programs.

“I received love and inspiration from everyone, and not just from people who contributed monetarily, but also from other runners and spectators that I met who saw Colorectal Cancer Alliance on my shirt and asked about it,” Doug said. “It felt as if I was running on clouds because of the outflow of love.” 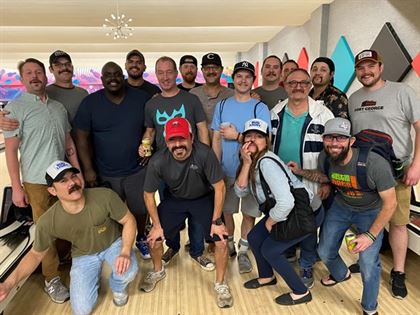 In November, Keith led Manager Mustache Madness in honor of his father, Edward Daly, who passed away from colon cancer in 2011 after surviving for eight years. The fundraiser also honored Joe Pieczonka, a regional manager for Little Woodrow’s, who is a 12-year colon cancer survivor.

Here’s how the fundraiser worked: Managers rocked mustaches and had their picture hanging up near the bar. By donating $1, guests could vote on which manager had the best mustache.

The madness was a unique experience for managers and patrons alike.

“None of the managers ever have just a mustache,” Keith said. “So it shocked our guest to see us with different facial hair for the month.”

In all, Keith and his gang of mustachioed managers raised $2,784.

The most interesting part of the event:

“Convincing all the managers to shave their beards and getting all five stores to participate, after doing at just one store last year,” Keith said. “Also, all of our employees making fun of their bosses' mustaches.” 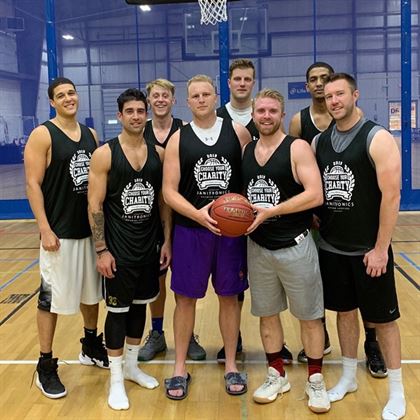 John is in gray shorts, holding the basketball.

Among the many traits Anne Karas instilled her son, John, one of the most important was to have a positive impact on the world. So as Anne began her battle with cancer, and after she passed away in 2013, John and his family have dedicated much time and effort to raise funds for worthy organizations.

“She was an amazing person who impacted everyone she touched in a tremendous way,” John said. “She was a superhero mom, driven business-woman, top-notch chef, and trusted friend.”

This year, John decided to take his DIYnamo fundraiser to the basketball court. A few of his former colleagues run a charity organization called Choose Your Charity, or CYC. The organization holds athletic tournaments each year to raise money for selected charities.

“I love basketball and I am passionate about fundraising for the Colorectal Cancer Alliance, so it was a no-brainer for me join the ‘2019 CYC Basketball Tournament’ to fundraise for a cause very dear to my heart,” John said.

Fundraising occurred from April through June, with the tournament occurring June 15 at the Starland Sports & Fun Park in Hanover, Massachusetts. John won the individual fundraising competition, and his team placed second in team fundraising. In all, John raised $3,400 for the Alliance.

When it came to playing basketball, however ...

“We were 11th out of 13 in the basketball tournament results,” John said. “Still lots of room to improve!”

But that didn’t take away from the experience.

“It was the best of both worlds!” John said. “I could play the sport I love with my closest friends in a competitive setting and raise money for cancer research!” 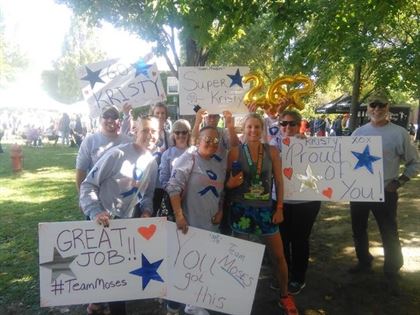 Kristy Odiorne is a runner, but she had never completed a marathon. That changed after her brother Billy passed away from colorectal cancer in August at age 46.

“Billy was such a beautiful soul, larger than life, and he always put others first and never left anyone out,” Kristy said. “After he passed, I was searching for something, anything to help during this time emotionally.”

A marathon had been on Kristy’s bucket list, and this time she had no excuses.

“I had such a drive and determination,” Kristy said. “There was a real purpose behind this new goal: my brother and helping raise awareness and money to end colorectal cancer. But I could hear my brother in my head saying, ‘Sis ... why would you want to run 26.2? I don’t like driving 26.2—you’re crazy.’”

Kristy announced her intent to run the Clarence DeMar Marathon in Keene, New Hampshire, on Facebook. She set a fundraising goal of $500, and within an hour, she passed it.

“Seeing my sister-in-law and family at the end with hugs and tears, it was worth every early morning and hours of running for 20 weeks,” Kristy said. “Life really is too short, and I’m so blessed to be able to have done this in my brother’s honor.” 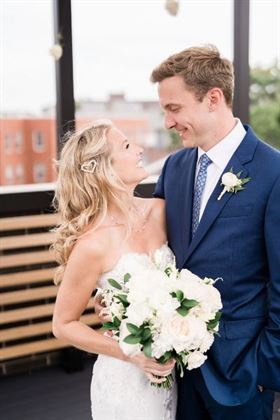 When colorectal cancer survivor Gwen Brack and her husband got engaged, they knew they wanted to do something different for their wedding.

“We wanted to make a difference,” Gwen said. So, in lieu of a wedding registry, they created a donation page where guests could give to the Colorectal Cancer Alliance.

“I know how much emphasis the Alliance places on early-onset diagnosis, research, and support, which is all very important to me since I was diagnosed as a very young adult,” Gwen said.

Gwen was a junior at DePauw University she was diagnosed with stage-IV rectal cancer, an experience that changed her life—and one the wedding guests, as close family and friends, could appreciate.

“Guests were so excited to donate, because they knew how much it meant to me and my husband,” Gwen said. “Because I have been surviving colorectal cancer for almost 11 years, I personally understand how essential the work that the Alliance does is, and we wanted to support this vital work.”