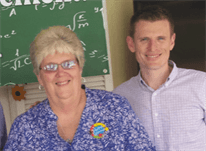 Just one year after Justin Hesketh’s stage-IV colon cancer diagnosis, he and his fiance Tom threw a Las Vegas wedding drawing party guests from all over the world.

“We’re talking everywhere from London to Africa,” said his mother, Ruth Hesketh. “He was not going to let cancer stop him from living his life.”

Justin was constantly looking for treatment options and ways to defeat colorectal cancer. But in January of 2017, Justin passed away at age 37. Justin's wide network of friends and family came together again for his celebration of life.

To keep Justin’s legacy alive, Ruth decided to become a monthly donor to the Colorectal Cancer Alliance. It wasn’t until this July that Ruth decided she wanted to do more.

In honor of Justin’s 40th birthday coming up this September, Ruth decided to create a Facebook fundraiser for the Colorectal Cancer Alliance. Once again, Ruth saw the power of Justin's friends and family.

“I set the fundraiser goal to $200, but as I was typing and working on it, I saw that two of my friends had already donated $200! So then I raised my fundraising goal to $500,” Ruth said.

Ruth ended up raising more than $2,000 for her Facebook fundraiser.

“It was so humbling to me,” Ruth said. “It just kept growing and I was so pleased.”

Now, Ruth’s monthly donation, along with the funds raised from Justin’s 40th birthday Facebook fundraiser, will go toward the Alliance’s Never Too Young Program—a program that focuses on young-onset colorectal cancer research, prevention, and patient support.

“Justin was 36 when he was diagnosed with stage IV colon cancer, and it hit us out of the blue,” Ruth said. “Why would you think someone at 36 would get colon cancer? He had so many executive physicals for his job, but he never got a colonoscopy. It was just baffling.”

Justin was in peak health at the time of his diagnosis. After each of his 22 chemotherapy treatments, he went back to full-time work and continued an exercise regime of running four to five miles regularly. During chemotherapy, Justin also got involved online with the colorectal cancer community and talking with others with the same diagnosis.

“He just wanted to meet other people going through the same thing he was,” said Ruth.

When asked what she wants people to know about young-onset colorectal cancer, Ruth said:

“To get screened sooner! What age should Justin have been screened? We don't know! Maybe if he got screened at 20 or 25, this could have been prevented.”

Be inspired by Ruth to create a Facebook fundraiser today to honor a loved one impacted colorectal cancer and help us to end this senseless disease in our lifetime.