Derek Dienner: A survivor behind the camera 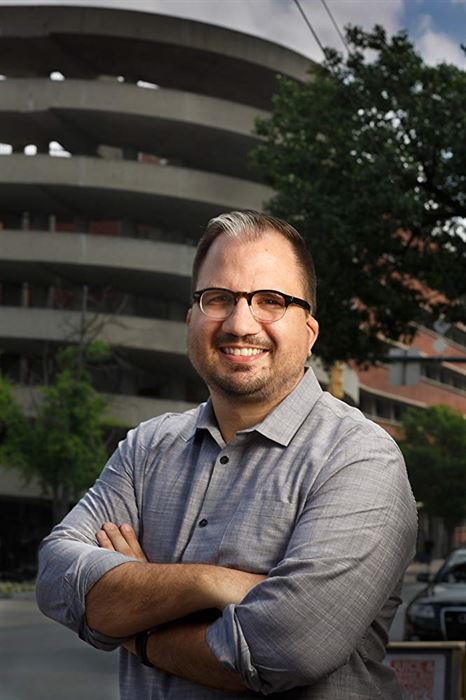 Earlier this year, six allies traveled to the media capital of the world to share their stories on camera. They were the first allies featured as part of the Colorectal Cancer Alliance’s Living Legacy Program.

In a room congested with video recording equipment, they laid bare the traumas and triumphs of colorectal cancer.  “I have a very different outlook on life,” Kevin Hays explains in his video. “I thank everyone for letting me be a part of their journey because it was a huge support,” Tabitha Cavanaugh says in hers.

One person who doesn’t appear on-screen is Derek Dienner, a stage III colorectal cancer survivor. But as the owner of MAKE films, a Lancaster, Pennsylvania-based video production company, he was integral to the success of the films—and not just because he operated the camera.

Derek created this behind-the-scenes video during the filming of Living Legacy:

Derek was days shy of his 32nd birthday when he was diagnosed, and his doctor had some concern that cancer had spread beyond the walls of his colon. Within hours of a CAT scan, the doctor called to say the tumor was contained.

“First of all, I felt blessed that my prognosis was good and that I didn’t have stage IV,” Derek said. “And I felt thankful that my sister-in-law, who is the family nurse, pushed me to go to a specialist and get checked when I had blood in my stool.”

With trademark optimism, Derek viewed his diagnosis as a calling.

“I had a new mission to not sit on life and let it pass you by, but to focus on what you want,” Derek said.

Derek wanted to make films, of course, so he partnered with others to create a documentary about his journey called “The Day I Became Alive.” As LancasterOnline reported:

“The Day I Became Alive” is a short documentary film co-directed by Allen Clements and Aaron Dienner and produced by MAKE films that follows Derek through 209 days of chemotherapy as he attempts to make sense of his diagnosis and wrap his head around his new life with cancer. The film shows Dienner, exhausted from chemo, talking to the camera in the half-light of his bedroom, being wheeled through the halls of a hospital, surrounded by his family and friends – and never losing hope.

“The other message I want to share was to think about your body, and if something is not right, go to the doctor and see what’s going on,” Derek said.

A call for help

The film made its way to the offices of the Colorectal Cancer Alliance, where staff had been planning to document the journeys of young-onset colorectal cancer survivors and caregivers on film.

“When the Alliance found my story, it was like, ‘Oh my gosh, the mission you are going after is my newly found mission,” Derek said. “Why wouldn’t I get involved in some capacity?”

“I don’t want to promote fear and produce hypochondriacs, but there are giant things people ignore,” Derek said. “I’ve run into people who had CRC, who had rectal cancer with tumors coming out of their body, and they just thought it was hemorrhoids. As they look back, they think they should’ve gone in.”

“I get a CAT scan in November,” Derek said. “There are still weird things from the chemo, neuropathy, I’m a little more fogged, but I’m happy to be alive, so I’m doing good.”

Being in a room with people presently in treatment, however, and reaching the depths of their stories, flooded Derek with memories.

“It brought back everything again,” he said. “And I don’t think it’s a negative thing. I think it’s something I should be reminded of—the fight I went through and the ongoing one my body goes through to keep it off.”

“It was sobering, and amazing to meet them, and I felt honored to lead these conversations,” Derek added.

Derek will again work with the Alliance in September at AllyCon, the Alliance’s annual national conference, where he will provide hands-on training in video and storytelling so allies can share their journeys with others.

“Everyone wants to share their story, but the Alliance can’t afford to have every person tell their story with me and a film crew,” Derek said. “At AllyCon, I’ll make a hands-on workshop, with broad strokes about preserving your story and finding moments to video-blog about. You don’t need a huge film crew to do that.”

The Colorectal Cancer Alliance’s Living Legacy videos, produced by Derek, can be viewed on YouTube here.