Craig Melvin: A brother, an advocate 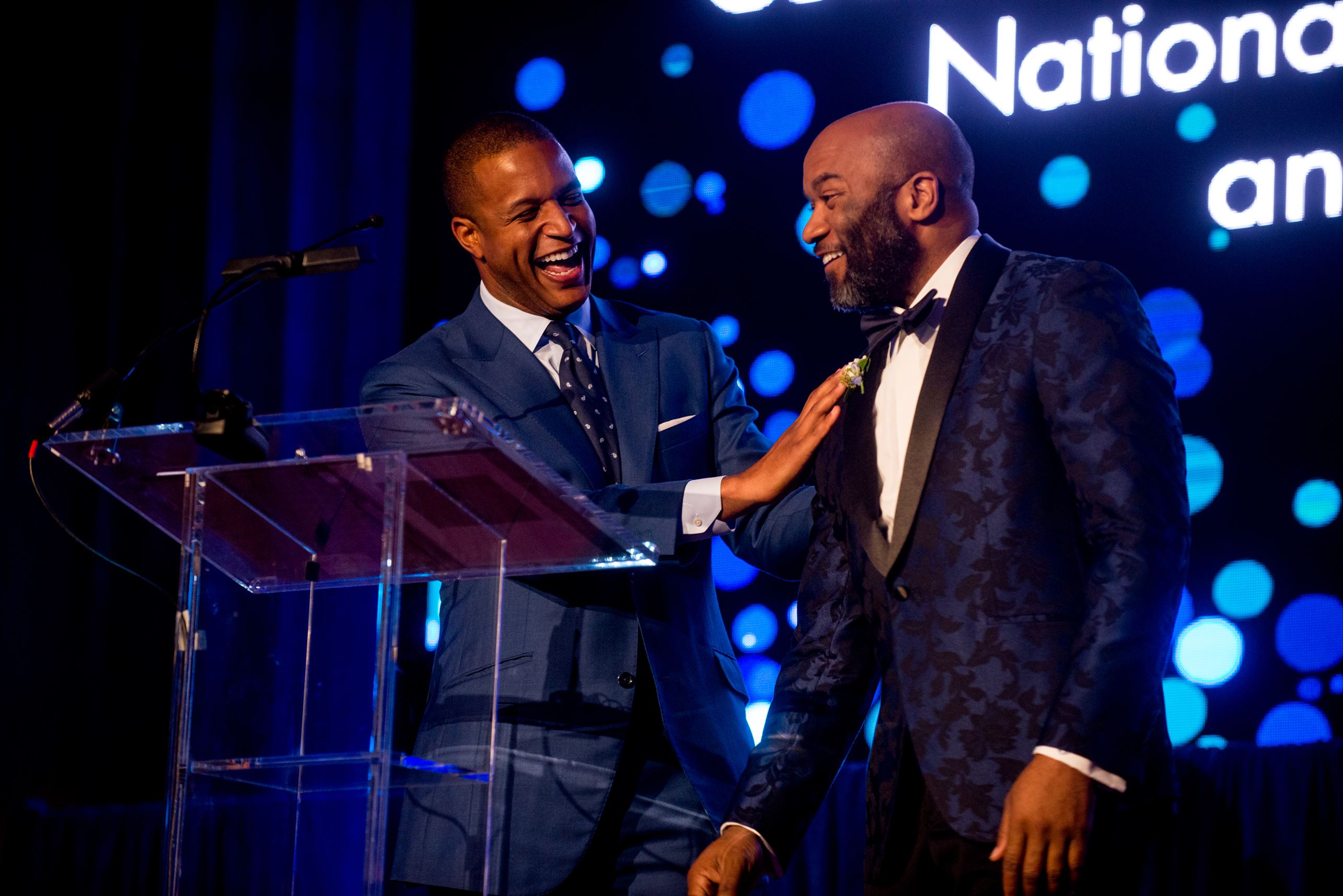 In many ways, national broadcast journalist Craig Melvin is like every ally. He is deeply concerned about his half-brother, Rev. Lawrence Meadows, who is battling stage IV colon cancer at age 40. He’s been bedside at the hospital. He calls to check-up. He texts.

What sets Craig apart is his ability to share Lawrence’s journey with millions of viewers. Through the Today show, he can transmit his brother’s story and fight against cancer to screens across the country—raising awareness and empathy for this disease. A feature story about his brother’s diagnosis last February demonstrated Craig’s reach.

“I did not fully appreciate the scope and the influence of television, of the internet, and maybe even my voice, until we ran the story more than a year ago, and people came out of the woodwork,” Craig says. “It was a story a lot of people could relate to, and I didn’t know that, and, I guess, why would I know that?”

In the broadcast, Craig is seen visiting Lawrence at a hospital, the church where he preaches, and the funeral home he co-owns. We watch Craig next to his brother when a doctor reads the results from Lawrence’s most recent CT scan, and we watch them talk about Lawrence’s war on cancer and inevitable thoughts about death, especially as it relates to his two young children. It’s a conversation with heaps of grace and a dose of humor.

“I could not get my head around it being you because you’ve always—no smoking, no drinking, no partying,” Craig tells his brother in the broadcast.

The scene cuts to Lawrence’s office, where he and Craig look at framed photographs together.

Craig narrates: “That’s Lawrence, in his funeral home, talking about a potentially deadly diagnosis but doing what he’s done since we were little, cracking jokes.”

When Craig found out his older brother had stage IV colon cancer—the most advanced stage, indicating that the cancer had spread to other parts of Lawrence’s body—it nearly knocked him off his feet.

“We thought the diagnosis was wrong,” Craig says. “I’ve come to find out over the past year that that’s pretty much the case for everyone this age who gets this diagnosis.”

Lawrence’s story is part of a startling trend affecting adults under 50 years old. Since 1994, cases of young-onset colorectal cancer have increased by 51%, according to the National Cancer Institute. Researchers aren’t sure why.

A follow-up to Craig’s February broadcast will be aired March 30 on Today.

Colorectal cancer often leaves an indelible mark on the lives of people it touches. Many people find a way to harness the powerful emotions and thoughts that come with a diagnosis and turn them into action through advocacy or fundraising. Craig and Lawrence have each done that, in their own ways.

Lawrence began by sharing his story.

“My brother is a man of God, and he likes to figure out how he can use his experiences to help others learn and inspire them,” Craig says. “I said maybe we should do a story about the diagnosis, so I floated the idea, and they loved it. The next thing you know, I’m in Spartanburg, South Carolina, doing a story about Lawrence and his family, his business, and his diagnosis.”

Lawrence has turned this disease into his life’s work, Craig says. For instance, Lawrence recently attended a health and wellness festival in Washington, DC, where he answered questions for television, newspaper, and magazine reporters.

“There are a lot of folks who would’ve gotten this diagnosis and crawled into a hole and clamped up about it, and he’s done the exact opposite,” Craig says. “He’s become quite the minister, if you will, in terms of advocacy and prevention and getting folks checked out, and that makes a kid brother proud.”

For Craig, time for advocacy is limited by his job and the rapid pace of 24-hour news. Almost every week he is someplace new, producing a story. Recently he was among a team of journalist covering the Winter Games in PyeongChang. With precious spare time, Craig says he prefers to focus on one issue at a time.

“There are a lot of causes out there, but there isn’t one right now that is closer to my heart because of what’s happening in my family,” Craig says. “I also think sometimes, when people are pulled toward three or four different causes, it’s hard for them to be as effective. So for me being able to focus my attention, as it relates to causes, just on the Alliance, for me it means more.”

And, of course, his television platform is a medium for advocacy, too. Craig is cognizant on how positive, humbling stories can impact an issue.

“You spend a fair amount of time in the media highlighting all the treacherous, awful, disgusting things that happen on a daily basis,” Craig says. “We do that in part because it is our charge, but we don’t always do the best job highlighting the inspirational, or sharing the stories of people who are good and do good things.”

After the story about Lawrence aired last year, people would stop Craig on the street and say they’re praying for his brother. They wish him well.

At the Blue Hope Bash, Craig was joined by Lawrence, who the next day would fly to a chemotherapy session. As they sat close and laughed, their bond was evident. From the stage and from their chairs, among the hundreds that joined them, they heard messages of encouragement and hope.

“Seeing and hearing the stories of so many who’ve beaten this dreadful disease was awe-inspiring for me and my brother,” Craig said at the time. “Raising money and awareness was the goal, but it sure was a lot of fun, too. I was honored to be a part of an evening filled with so much hope and love.”

Craig says one trait Lawrence carries from his father is a reluctance to talk about personal issues, or wear his heart on his sleeve. But, if there is a silver lining to this disease, it’s that it brought them and their family closer.

“When there is someone you love who is going through something like this, and you have a front row seat to it all, it really does make you appreciate things a lot more—not material things, but life and your family and the time you have with your family,” Craig says. “You appreciate all of those things.”

And we appreciate you, Craig. The Alliance stands with Lawrence, you, and your families.