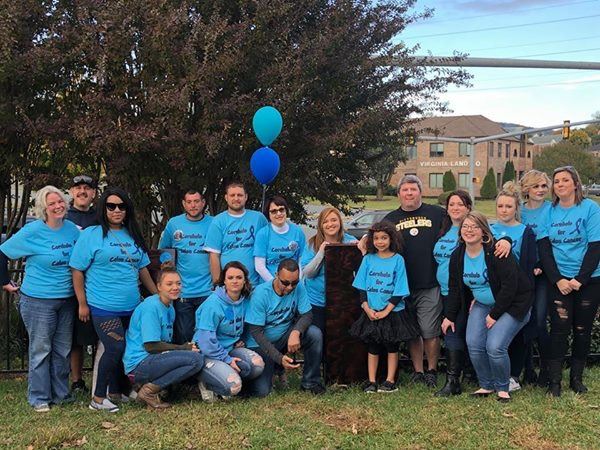 At Radford University in Virginia, corn hole is a big deal. Giving to charities is, predictably, not as popular among cash-strapped college students.

But when Britt Taylor’s Phi Sigma Sigma sorority used corn hole to raise money for the Colorectal Cancer Alliance, in honor of a sister’s mom who had passed away from the disease, donations piled up.

“We came up with something for them to come out and do, something they were already doing, and it was super affordable to play,” Britt said.

After graduating in 2014, Britt put corn hole on pause to figure out post-college life, and she started dating a man named Elliott. Elliott’s father had been diagnosed with late-stage colorectal cancer and passed away shortly thereafter. Britt wanted to do something to honor Elliott's dad.

Cornhole for Colons was born again. Nowadays, it’s a semi-annual event held at the Lazy Parrot Grill in Charlottesville, Virginia.

While the bar encourages patrons to “come and be lazy,” when Britt sets up the cornhole boards, fires up a DJ, and raffles gifts donated by local business, she and her Cornhole for Colons teams are anything but lazy—they’re DIYnamos, raising funds to support the Colorectal Cancer Alliance’s life-saving programs.

Britt’s latest event had 26 teams of two people, filling the bar and the space outside where they set up the games. The Lazy Parrot Grill even ran out of Bud Light and wings, their two most popular menu options.

As with many first-time events, the inaugural Cornhole for Colons didn’t go as well as Britt had hoped.

“I didn’t prepare as well as I should have,” she said.

But in true DIYnamo form, Britt didn’t give up. Each year she evaluated the event’s successes and where she could improve. These days, she recruits colleagues from her salon to help gather donations and put on the event.

As the event has progressed, it’s become more sophisticated. Last year, she traded a haircut for professional design work on a flier, which she passed out to local businesses to gather donations. She said most businesses are willing to donate something if they have enough lead time. Her next event will feature a professional banner donated by a local company, replacing a hand-painted version.

In all, Britt has raised more than $6,000 with Cornhole for Colons. But the benefits don’t all come to the Alliance—the event has also helped Elliott and others. As she was planning the event, Britt lost a family friend to colorectal cancer who had struggled with the disease for two years.

“I’ve been in contact with so many people who have had this specific kind of cancer, and that means it’s out there, but so many people have never heard of it,” Britt said. “But I think Cornhole for Colons is also a way for my boyfriend and family to honor those we’ve lost and talk about it, and know they didn’t pass away for nothing—they may be able to help someone else.”