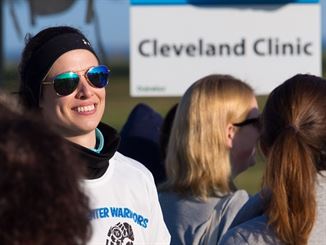 There are many things to consider when making the decision to host an Undy Run/Walk in a brand new city: Do we have Colon Cancer Alliance supporters in the area? Are there GI doctors and local businesses willing to support the event? And most importantly, are there people in the local community willing to be the boots on the ground and spread the word about the Undy? In the case of the first annual Cleveland Undy Run/Walk held this past April, the answer to all of these was a resounding “Yes!”

Dr. Matthew Kalady, M.D., Digestive Disease Institute, Cleveland Clinic, spearheaded the initial discussion to bring an Undy Run/Walk to Cleveland when he reached out to the Undy team in 2013. Seeing the synergy between the missions of the Colon Cancer Alliance and the Cleveland Clinic, he recruited a strong Undy Engagement Committee to give this event the attention needed to make it a success. And it was—with more than $60,000 raised, this was one of the most successful inaugural Undy Run/Walks since the program started in 2008.

We are proud to have partnered with Cleveland Clinic this year and look forward to a continued partnership in raising colon cancer awareness and funds for the Colon Cancer Alliance and the people in the Cleveland community. We had a chance to speak with Dr. Kalady about the first Cleveland Undy and how it all started!

How did you get involved with the Undy Run/Walk?

As a colorectal surgeon, I heard about the Undy Run from colleagues in my professional society who participated in events in other cities. It seemed like a great concept and for a great cause. After learning more about the Colon Cancer Alliance’s mission, I reached out to them to see what it would take to bring an Undy Run to Cleveland. They were very approachable and excited about establishing a Cleveland Undy Run/Walk.

Why did you want to bring the Undy to Cleveland?

The Cleveland Clinic, both within the Digestive Disease Institute and the Taussig Cancer Institute, has a long history of caring for patients with colorectal cancer. It is part of our mission not only to treat patients with colorectal cancer, but also to try to prevent it through education and screening programs. We have run extensive awareness campaigns every March, which is national Colorectal Cancer Awareness month. We had been looking to do a more active event and one that could mobilize and unite the local community. The Colon Cancer Alliance mission aligns very closely with what we also want to achieve; we thought it would be great to have a run that would bring people together, have fun and raise awareness about the disease.

How did the Cleveland Clinic build excitement for the Undy?

Preparing and planning the Cleveland event was truly a grassroots campaign. Doctors, nurses, other caregivers and even patients got involved in spreading the word. We started with email blasts and encouraged people to participate by joining one of the various planning committees. As we got organized, we started friendly competitions by forming teams for running and fundraising. We used social media outlets such as Twitter and Facebook, ran bake sales and advertised throughout the medical campus and in our local communities. Our marketing group was fantastic in helping secure pre-race publicity in the newspaper and on the local TV news. There was quite a buzz about the event.

What advice would you give to other first time partners who want to get the community involved?

Just get started. It can seem overwhelming at first, but just dive in and get going. Build a good team and use the Colon Cancer Alliance’s resources. Reach out to professional and personal contacts—I was amazed at how many people quickly got behind the cause.

What are you most looking forward to about next year's Undy?

We hope to increase our participation and engage more local business, organizations and people from the community to participate as runners and supporters. I also look forward to the creative costumes!