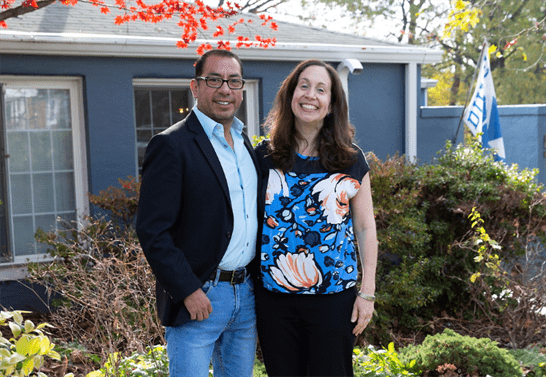 When you grow up in the DC metro area, you learn first-hand how politics and and policy shape the nation. Living near the nation’s capital, it is commonplace to have dozens of friends, family, and neighbors deeply rooted in occupations and hobbies involving politics. Angelina McIntire knows this well.

Having grown up in Virginia and working as an international development professional in DC, politics was a way of life for Angelina. From grassroots advocacy to on-the-ground campaigning, Angelina embodied the DC political lifestyle.

Shortly after her 40th birthday in the fall of 2016, Angelina experienced a week of curious symptoms including back pain, front pain, gas, and bloating. She intuitively knew something wasn’t right.

“I’d get stomach aches off and on since my 20s,” Angelina said, “and I’d seen gastroenterologists’ who continually diagnosed me with irritable bowel syndrome. I have always had minor stomach issues and after that terrible week of gas and bloating everything went down the rabbit hole.”

The fall of 2016 was all about campaigning in Washington, DC. The city was gripped with anticipation of who would be the next president. Angelina was simultaneously occupied with the uncertainty of her life. During her scheduled colonoscopy following her week of symptoms, a tumor in her sigmoid colon was discovered.

“At that point we knew it was a likelihood of cancer,” she says. “My first reaction was how on earth did this happen? No family history, no consistent symptoms, totally healthy lifestyle. It just kind of blew my mind.”

Angelina, ever the resolute advocate, was campaigning the day of the election after her scheduled colonoscopy. “I was about to face a major health issue but I was still out there,” she said. From there, she was unstoppable, scheduling a scan on inauguration day and marching with peers to fight for healthcare.

“With the whole debate over the healthcare, my heart was broken. It’s scary. Anyone can go from healthy to sick overnight. Being afraid of things like pre-existing conditions isn’t fair. It led me to really have greater empathy. You see people out there saying ‘healthcare is an individual responsibility,’ but there are plenty of us who take amazing care of ourselves and we still get cancer. None of us know what lies in store for us. It’s amazing how fine that line is between being healthy and not healthy.”

When Angelina was first diagnosed she felt good. She was optimistic and, with the support of her husband and parents, she was ready to get back to a normal life. She did chemo, went on a work trip to Africa (including a safari), began socializing again, and assimilated back to the eventful DC metro lifestyle.

After a successful, hopeful surgery in March 2017, her doctors felt confident the cancer was completely removed and she was ready for a fresh start. However, things soon thereafter dramatically fell apart. Angelina wound up in the hospital with a small bowel obstruction, resulting in another hospital stay. From there, several grueling side effects took place and eventually another bowel obstruction occurred resulting in another surgery and a multiple week hospital stay.

“With every bit of news I felt like I’d fallen down this rabbit hole where there’s no exit, both on a personal note and societal note too,” she says. “You treat the cancer and five other things pop up. I had a plan and the plan fell apart.”

This past November, Angelina experienced a recurrence in her liver and lungs and learned the cancer is no longer curable. Over the holidays, with the support of her family, she decided to go back on a much less aggressive form of chemo to hopefully keep the disease stable while exploring clinical trial options. Despite the recurrence, after months of constant struggling and going through insomnia, and even depression, Angelina was able to get herself back to a stronger place.

“I’m not willing to sacrifice quality of life again,” she says with gratitude. “You always think it’s not going to happen to you. It parallels the path that, being in DC, you feel all the political stuff so much. I’m hopeful that some aspects of the world will right themselves, and I just hope for the best for myself, day in and day out. I don’t believe things happen for a reason, but I do believe we make reason for things, and out of that can come good, no matter what the outcome for ourselves.”

Yesterday was the thirteenth annual DC Scope It Out in Washington, DC. Angelina was a true crusader, attending with an entire team of advocates, continuing her passion to champion for all. During the event she was a survivor speaker and even raised over $17,000 for the DMV community.

To learn more about Angelina’s story or early-onset colorectal cancer, visit ccalliance.org. You can also reach out to the Colorectal Cancer Alliance’s Never Too Young Manager, Kim Newcomer.

In March, we observe National Colorectal Cancer Awareness Month. as we build our nation of passionate allies, fiercely determined to end this disease within our lifetime.