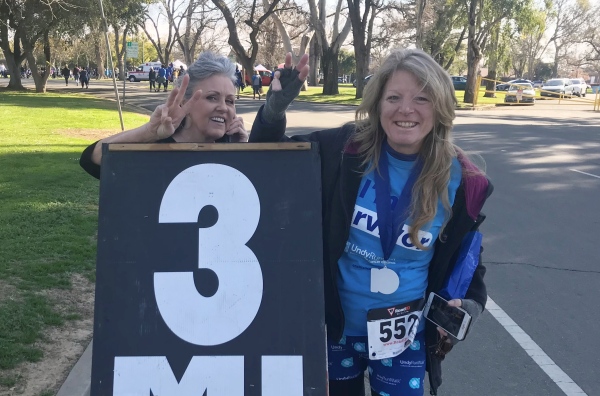 Lauraine Bacon won’t let a stage IV colorectal cancer diagnosis define her — not even if it’s her second bout with the disease.

Whether splitting firewood under the towering cedar trees in her backyard, snowshoeing in the country, or finishing that quilt she began decades ago, she’s completing projects that provide meaning and solace. It’s a therapy for her mind as she undergoes chemotherapy for her disease, she said.

“Sometimes, life throws curve balls at us — cancer is definitely a curve ball — and I decided not to let it hit me in the face,” Bacon, 59, said. “I’m not just sitting at home watching TV and thinking about poor, old me.”

Bacon won’t be sitting this weekend, either. Instead, she will be leading her team of walkers, the Dashing Derrieres, in the mostly virtual Sacramento Walk to End Colon Cancer on February 20. The Walk is organized by national nonprofit Colorectal Cancer Alliance to help build the community, awareness and funds needed to end the nation’s second deadliest cancer.

Participants can walk safely in their own neighborhoods and share their experiences on social media with the hashtag #ColonCancerWalk. Walkers can then safely gather for a drive-through victory lap to celebrate efforts to end this disease. Registration fees have been waived for all participants in 2021.

The Sacramento Walk comes just before National Colorectal Cancer Awareness Month, which runs through March. This year, the Colorectal Cancer Alliance is aiming to get colorectal cancer screenings back on track, as COVID-19 has led thousands of people to delay or forgo the potentially life-saving procedure. Screening is the No. 1 way to prevent colorectal cancer or detect it early, when it’s most treatable. People at average risk should begin screening at age 45.

“The pandemic has taken all the oxygen out of the room,” Bacon said. “It doesn’t mean colorectal cancer is stopping. It’s not taking a back seat. That’s why the Walk is important. It helps create and build awareness. Maybe I send an email or put something on Facebook about supporting me in this Walk, and maybe that triggers something in somebody so they get screened.”

Bacon’s first diagnosis of colorectal cancer came in 2015 from a malignant polyp, discovered during a routine colonoscopy. Her second came in 2019, after rectal pains prompted her to receive a follow-up procedure.

This year, an estimated 149,500 people will be diagnosed with colorectal cancer, according to the American Cancer Society, including 15,880 in California.